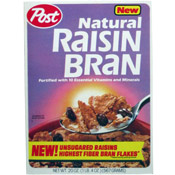 
This cereal was actually a brief renaming of classic Post Raisin Bran... a manufactured chance to reintroduce an American favorite.

But the back of the box explained that the cereal was not really "new" at all:

"Why? To let everyone know that it's natural. Post adds no artificial colors, flavors or preservatives - just good wholesome ingredients like unsugared raisins and whole wheat and bran flakes. 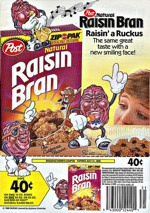 Submitter: jeffrey
Uploaded: 11/16/2010
Additional details
Upload an image for this cereal
Comments About This Cereal
What do you think of Natural Raisin Bran?

I wish you could glue the inner bag to the box of cereal like it use to be. So many times towards the end of bag, that the kids have accidents whereas the whole bag comes out and cereal spills all over the counter or floor. This recommendation would be a great gesture to rectifying a reassuring issue with all cereals. Thank you.