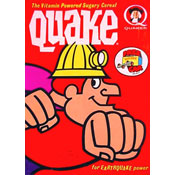 
Quake and it's partner cereal Quisp were introduced by Quaker Oats in 1965.

Quake was described in commercials as "wonderful wheelies of corn and oats... buzzin' with honey and bustin' with earthquake power." The cereal pieces were shaped like small gears with holes in the center.

Quake and Quisp were almost always promoted together in television and print advertising. The cereals' mascots were developed by Jay Ward and Bill Scott, the creators of Rocky & Bullwinkle. Quaker enlisted the team to create characters that cereal brands could be built upon. Two years earlier, Quaker, Ward and Scott had great success using the mascot-precedes-the-cereal formula when they created Cap'n Crunch.

The cartoon spokesman for Quake was a large (nearly menacing), muscular, broad-jawed man who wore a miner's helmet and a cape. It was implied that Quake the character and Quake the cereal both came from the center of the earth, which explains the miner's equipment and references to earthquakes. Early advertising distinctly showed that Quake had the ability to fly. That aspect of the character was later downplayed in favor of Quake's clever use of unconventional transportation such as whales or swimming horses.

The mascot for Quisp cereal was a pink alien also called Quisp. By means of a propeller lodged in his head, Quisp would fly around promoting his cereal and often provoke Quake with challenges that Quisp was a better cereal with better premiums.

While the two cereals were virtually identical in flavor (Quake was said to be slightly crunchier), Quisp proved to have much more consumer appeal and traditionally beat Quake in sales. Quaker placed the blame on Quake the character. 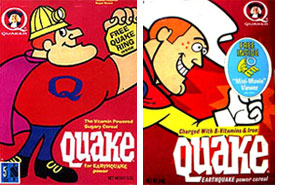 In 1967, Quake the burly miner was transformed into a thinner, only-slightly-more-kid-friendly rendition of himself. The miner's helmet was traded in for an Australian cowboy hat. The change in appearance was explained in ads by a story line in which Quake entered a "new & improver machine". Gears and automated boxing gloves plummeted the large character until he emerged from the machine thinner (and with a new hat).

Despite efforts to make Quake less daunting, Quisp continued it's reign as the more popular cereal.

In 1972, Quaker asked consumers to vote on which cereal/character they liked best. The loosing cereal would be discontinued. Based on the cereal's sales in the preceding years, it was a foregone conclusion. By 1973, Quake had disappeared from grocery store shelves.

The Quake character reemerged for a short time in 1974 in ads for Quake's Orange Quangaroos. While the new cereal had his name, Quake (still shown as a trim Australian-influenced cowboy) had a limited roll in commercials - playing second banana to his pet, Simon the Quangaroo. Like Quake, Quangaroos was pitted against Quisp in ads. Quisp proved to be more popular yet again and Quangaroos disappeared shortly after.

Know premiums in Quake Cereal: a super spinner toy, an explorer's kit, a big slick gyro car, an assortment of rings, a Quake helmet, a QuakeMobile toy car and a Quake MiniMovie player. 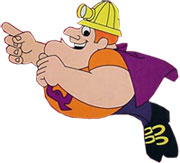 The voice of Quake was supplied by William Conrad, a large American actor known for his roles in the television shows Cannon and Jake and the Fatman.

Animation fans know Conrad as the voice of the narrator on Rocky & Bullwinkle.

Quake's mother appeared in several Quake cereal commercials. The most notable appearances were in commercials where Quake changed his image by entering a "new & improver machine". Before her son transformed, Mother Lode would say, "I like you just the way you are". When Quake emerged from the machine skinnier, she would repeat the phrase with more excitement.

Quisp & Quake Commercial
Additional Images
These are the most recent images. Click here to see all pictures for Quake. 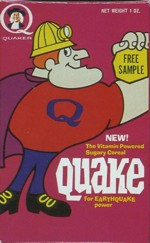 
Upload an image for this cereal
Comments About This Cereal
What do you think of Quake?

Quake was it for me. I remember sending 50 cents and two box tops for the Jay Ward premium Quake helmet all those years ago. And like all kids, my mom threw it out when we moved to the burbs. I recall writing to Quaker oats asking to see if they could send me out another helmet to replace the 'lost' one. I got the sound of crickets back.

I think Quisp won out because it was seen as the 'underdog' of the rivalry, and people generally go for underdogs... (This is also why the Quake 'makeovers' didn't work.)

I voted for Quake as I liked the character and cereal best. My best friend voted for Quisp and I was devastated that he won. I do recall seeing Quake re-issued briefly in the 1990s; it was on Phoenix grocery shelves.

I have a dream, a wish, that Quake will come back. I loved it so much. Come on Quaker, bring it back!

Loved Quake cereal. Bring it back.

I loved both Quake and Quisp. I wish that Quaker would bring them both back. As for the comment that Quake was reintroduced later as King Vitamin... the shape might have been the same, but the flavor was VERY different. I could not stand the taste of King Vitamin.

Quake did indeed disappear from the market altogether after the Quake Quangaroos cereal disappeared from store shelves. Later the cereal re-emerged from limbo but this time packaged under another brand label named 'King Vitaman.' Same cereal, same shape and size, different packaging. One of the television ads had this hook phrase: 'If you liked Quake, you'll love King Vitaman!"

Quake WAS crunchier! I liked 'em both. Recently, Quisp reappeared at my local market and I bought about 8 boxes. Bring back Quake!