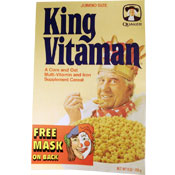 From: Quaker
Introduced in 1970


In development, this product was called King Vitamin. The name was changed when a federal regulatory agency disallowed the use of the name "vitamin" for a product that wasn't a vitamin. The second to last letter was changed to an "a" and King Vitaman was named.

According to ads shortly after the cereal was introduced, King Vitaman contained "100% of the minimum daily adult requirements for vitamins and iron established by the U.S. Government".

In its initial years, the cereal was described on boxes as "sugary sweet tasty little crowns... kids love 'em" and "a corn and oat multi-vitamin and iron supplement cereal". When the cereal industry was forced to reign in the claims made on cereal boxes, the description was changed to "a low fat and cholesterol free food - excellent source of 8 vitamins & iron."

The first mascot for King Vitaman cereal in 1970 was an animated king created by Jay Ward Production, the same company that created Cap'n Crunch, Quisp, Quake and Rocky & Bullwinkle. A year later, the animated king was replaced by a real-life man, George Mann, playing the part of King Vitaman.

In 2000, Quaker gave the King another overhaul. The current King Vitaman is again illustrated and has an older, wiser look that his animated predecessor.

These days, the super vitamin rhetoric continues to be toned down. Pepsico, the current parent company of Quaker, describes the cereal on their website as "a good source of 12 essential vitamins and iron and 100% of the recommended daily value of folic acid".

One early box of the cereal described itself like this:

"King Vitaman Cereal is the delicious corn and oat cereal packed with a full 100% of your minimum daily vitamin and iron needs. Children love the sweetly crisp little crunchy crowns - as you will too! Have a breakfast - solidly nutritious as well as delicious - with cereal, toast and butter, fruit and a glass of milk. Crunchy goodness, that's King Vitaman's crowning achievement."

The first mascot for King Vitaman cereal was a feisty, little king with a long nose. He was always ready to protect his supply of King Vitaman cereal from the dubious dark knights trying to get at it, including his arch enemies the Blue Baron and the Not-So-Bright Knight.

This mascot was created by Jay Ward Productions, the same people who gave us the Cap'n Crunch character and Rocky and Bullwinkle. 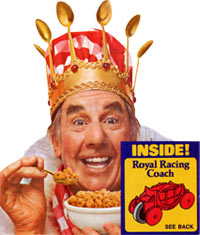 The second mascot for King Vitaman cereal was a man dressed as a king. This mascot replaced the original illustrated king in 1971, only a year after the first mascot was introduced.

Playing the part of King Vitaman II was actor George Mann. It's interesting to note this mascot's crown made of golden spoons and a checkered tablecloth.

It's also amusing to look pictures of King Vitaman II with the inside knowledge that the man who played him struggled with alcohol problems. Expert make-up artists were routinely called in to cover his red nose and brighten his tired, droopy eyes. 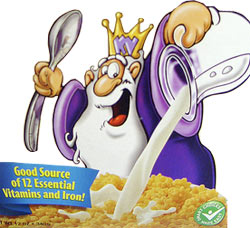 The revamped King Vitaman who appears on cereal boxes today was introduced in 2000. The character marks a return to using an illustrated mascot for the cereal.

The current king looks wiser and almost wizard-like compared to the feisty, red-headed, mustachioed king who introduced the cereal in 1970.

While we have no video proof of King Vitamin III's personality, it's assumed that the first king was a little tougher and funnier than this happy guy.

1972 King Vitaman Commercial
Additional Images
These are the most recent images. Click here to see all pictures for King Vitaman. 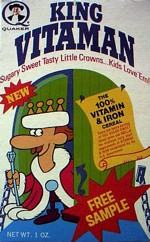 
Upload an image for this cereal
Comments About This Cereal
What do you think of King Vitaman?

Will Quaker ever bring King Vitamin back? Please.

Very close to Cap'n Crunch. It was pretty good. Now it sucks.

I used to buy King Vitaman and have been looking for them for years. They stop selling it in Orlando, FL. I don't know why. It was a nutrition cereal. Please come back to my city.

The current version is only okay. Bland. The original recipe King Vitaman was so delicious!

I still this cereal them at the Food City store.

I remember I bought a box of King Vitaman cereal in Plainview, Nebraska years ago.

By Hale The King V

I can remember my grandfather and me buying this at the local neighborhood store. I was about 3-4 years old in the early 1970's. We had to use the 5 foot tongs to get it down from the top shelf. I was recently buying this at my local Marc's store near Cleveland, Ohio up until about 2 years ago. That store is out of my way a bit and was the reason I started shopping there. I still go there hoping to find King Vitaman, but I see I'm not alone. I voted "Awesome" in the ratings box only because there is not an "AWESOME!!!" rating.

Had these as a kid in the 90's. I do not see them around anymore. We always added sugar to them.

One of the best cereals ever - right up there with Quisp. I like Rocky and Bullwinkle too. Kaboom failed in comparison and Quisp and King Vitaman didn't stain your clothes or the kitchen floor or furniture if you dropped a wet piece on it like Kaboom did. It could stain concrete and it did. If you dropped Kaboom on the patio or kitchen floor the stain from the food coloring was there for weeks or months if didn't wipe it up that second. Imagine what it did to your insides. Scary to think about.