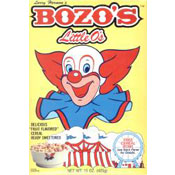 From: Larry Harmon's
Introduced in 1988


The complete name of this cereal was Larry Harmon's Bozo's Little O's. It was described on the box as a "delicious fruit flavored cereal (that was) ready sweetened."

Company Description: Larry Harmon, whose real name was Lawrence Weiss, played Bozo the Clown on a children's show which originated in on KTLA-TV in Los Angeles in 1959. Harmon purchased the rights to the clown and aggressively marketed the Bozo persona, and in so doing, he made Bozo the world's most famous... Read on and see all cereals from Larry Harmon's
This cereal belongs to the following Mr Breakfast Cereal Families:
Upload an image for this cereal
Comments About This Cereal
What do you think of Bozo's Little O's?

I don't remember the cereal but I watched the show. I was always jealous of all the kids that got to be on the show. :p

I grew up watching Bozo in Illinois. We never had the cereal, but it would have been fun to eat while watching the show with my 2 brothers - also big Bozo fans. Great memories watching this and Saturday morning cartoons before going out to play.