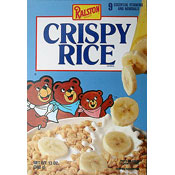 
This Rice Krispies knockoff featured three bears on the box. They appear to be a Papa Bear, a Momma Bear and a Baby Bear. We know the cereal existed in 1988.

The side panel of one box included a recipe for an Ice Cream Cone Pie. Here's the recipe as written on the box: 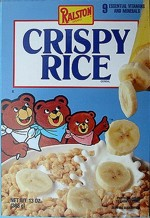 Submitter: jeffrey
Uploaded: 8/11/2010
Additional details
Upload an image for this cereal
Comments About This Cereal
What do you think of Crispy Rice (Ralston)?

I received a box of Ralston's Crispy Rice cereal in a food box and really liked it but can't find it in any store locally. Where can I buy it? I live in Metairie, Louisiana. Zip code is 70001.