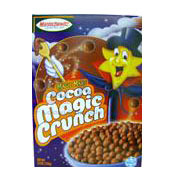 From: Manischewitz
Introduced in 2007

Passover, also known as Pesach, is an eight day Jewish holiday that commemorates the exodus and freedom of the Israelites from Egypt. In 2007, Passover began on the 3rd of April and continued until the 9th of April.

According to Kosher Today - The Community Of Kosher Food & Beverage Professionals (3/6/07), the three new cereals "are formulated with potato starch rather than matzo meal to adhere to stricter dietary laws, making it available for a larger audience to enjoy. The Cocoa Magic Crunch and Fruity Magic cereal products include fun and exciting children's activities on the back panel. These two products also leverage the 'Magic Max' character created to help make kosher learning fun and simple."


Click here to see all cereals from Manischewitz.
This cereal belongs to the following Mr Breakfast Cereal Families:
Featuring: 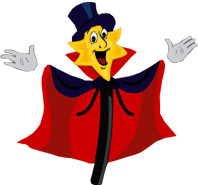 According to the Manischewitz website, Magic Max is "a whimsical character that makes kosher learning fun and simple. Whether it's preparing a holiday meal, or a unique way to learn the alef-bet, Max is all about smiles and having fun."

Magic Max, who first appeared in 2006, makes public appearance for Manischewitz, although it's widely suspected that often times it's not Magic Max who shows up but a person in a Magic Max Costume.

Upload an image for this cereal
Comments About This Cereal
What do you think of Magic Max's Cocoa Magic Crunch?

The total kcal math for the vanilla variety made me do a double-take. With regards to spoiled flavor, I'd bet on bad chemical reaction with this year's potato starch batches.

Tastes dry and chocolately by itself but once you add the milk the taste changes entirely! Sour with a bad after taste (and my milk was not spoiled). I swear it did not taste like this when I was a child - always loved Passover cereals so am very surprised to wake up to this on Passover morning.