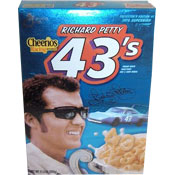 
The complete name of this cereal was "Cheerios Racing Presents Richard Petty 43's". The cereal pieces were essentially Cheerios in the shapes of fours and threes. The #1 edition of the collectors box featured Richard Petty wearing sunglasses, his blue number 43 car speeding by in the background and a bowl of the cereal in the foreground.


The following detailed description of the cereal is from Motor Trend Magazine:

"Though I've been fortunate to receive numerous awards and honors through the years, seeing Richard Petty 43's come to life has been a real thrill," said Petty. "I'm proud to be associated with General Mills and truly appreciate this one-of-a-kind tribute."

"Richard Petty has given so much to race fans and their communities through the years that it seemed only fitting that Cheerios, primary sponsor of the No. 43, honor him with his own cereal," said Laurie Greeno, vice president of Motorsports at General Mills.

Insiders hint that there is research and development underway on a series of track-shaped Cheerios, but Watkins Glenn is confounding the food engineers. 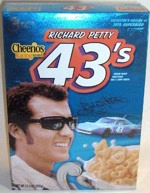 Submitter: Crawfish Mike
Uploaded: 3/12/2008
Additional details
Upload an image for this cereal
Comments About This Cereal
What do you think of Richard Petty 43's?

What is this car worth still in package?

Last week, a friend of mine went to the local antique trade days and found the "Grand Prix" edition of this cereal. I even tried it. Though the cereal was soft and a bit stale, the flavor was very, very sweet. I love those sugar sprinkles. I wish they still made this cereal. Maybe I can start eating cereal again since I am a NASCAR fan and especially a Richard Petty fan.

My favorite Nascar driver. And he was great as a voice actor playing the king in Cars.

I think this cereal is the bomb!!! When they were selling in WalMart, we bought a bunch of boxes. They were delicious.

We obviously never got this in NYC, but I found it in Las Vegas on a business trip and brought four boxes home (two for a fellow NASCAR fan). Good stuff.

By Gary (The Truck)

Richard Petty thankfully is way better than the cereal was!!!