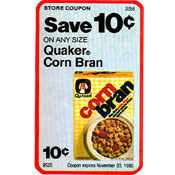 From: Quaker
Introduced in 1980


This was (according to the box) the first high-fiber cereal made from corn bran.

"Quaker did it. Put the great taste of corn in a bran cereal.

"Presenting the first bran cereal made with the bran of corn: Quaker Corn Bran.

"Until now, all bran cereals have been made from wheat. But a lot of people think wheat bran has a heavy taste and texture. That's why there's Quaker Corn Bran.

"Corn Bran gives you the benefit of wheat bran, but every spoonful is bursting with the light, golden flavor of corn. And best of all, Quaker Corn Bran stays light, crisp and delicious when you pour on the milk.

"The benefit of bran. The great taste of corn."

Upload an image for this cereal
Comments About This Cereal
What do you think of Corn Bran?

I have been looking for this cereal in Chico, CA. I used to eat it a lot back in the late 80's and early 90's. Now I can't find it! Please bring it back!

Quaker Corn bran was the best. Please bring it back.

Shame they stopped making it. It wasn't popular because it was never on the shelves to buy. We would buy out the store's shelf whenever we found it. For some reason stores wouldn't carry it. Oh a person could buy all the sugar coated diabetic shock cereals available, but a just right sweetness bran cereal that kids liked must have been outside the box for the store buyers.

Wish it would come back. Tastes great when you use it for Chex party mix.

I love Quaker Corn Bran. I purchased a similar cereal at Target called Quaker Corn Crunch but it isn't the way I remember my Corn Bran cereal. Close, but not the same. Why do they always have to change things. If it ain't broke don't fix it! Just like the fools who ruined Honeycomb cereal.

I really like this cereal. But I can't seem to find it anywhere. Can anyone tell me what stores carry it?

I can't find Quaker Crunchy Corn Bran anywhere these days. Does anyone know where I can purchase some? I LOVE this cereal!

Great cereal, but no one seems to carry it anymore.

I absolutely love this cereal but can only find it in Target. Why can't other stores carry it?!

I was a kid in the early 80's and my earliest memories of cereal were solely this delicious cereal. When I grew up and started shopping for my own cereal, I would always look for this but never found it (in Wal-mart or Kroger's). Next time I go to Target, I will see if they have it. I haven't had Corn Bran since the '80's but still remember how much I loved it.