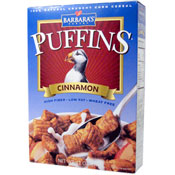 
A cinnamon version of the original Puffins cereal (introduced in 1995). According to the box, Cinnamon Puffins are "high fiber... low fat... wheat free." One serving has 6 grams of fiber, 1 gram of fat and 100 calories.

Upload an image for this cereal
Comments About This Cereal
What do you think of Puffins - Cinnamon?
There are no comments yet for this cereal. Be the first! Was it good? Was it bad?
Do you have information not included in the article? Let the world know!