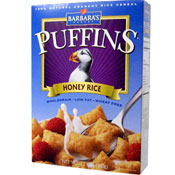 
A honey rice version of the original Puffins cereal (introduced in 1995). The box has described Honey Rice Puffins as a "100% natural crunchy rice cereal... (that's) low fat... wheat free... (and made from) wholegrain."

Upload an image for this cereal
Comments About This Cereal
What do you think of Puffins - Honey Rice?
There are no comments yet for this cereal. Be the first! Was it good? Was it bad?
Do you have information not included in the article? Let the world know!