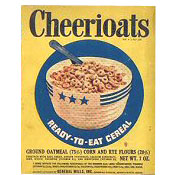 From: General Mills
Introduced in 1941


Cheerioats were developed using the same process used to create Kix cereal a few years earlier. Vitamin-enriched dough was extruded into small shapes, dried and then shot through a puffing gun. Puffing is a pressurized, flash cooking process that had been used to make puffed rice and puffed wheat since 1904.

"Now - Try the Oatmeal Cereal you don't have to cook! Corn and Rye added for flavor, crispness! No wonder Cheerioats is the new breakfast sensation in Hollywood - and all over America! Here at last is something really new in cereal - crisp, crunchy golden-brown nuggets of goodness that give even your teeth a thrill as you munch them.

"Yes, Cheerioats is as nourishing as it is delicious. It is 75% ground oatmeal, with corn and rye added for flavor and crispness. And here's the big news - Cheerioats is all ready to eat. Think of it! An oatmeal you don't have to cook."


Company Description: Officially created in 1928, General Mills traces it's history back to the 1860's and the ownership of two flour mills. Since then, the company has become the world's 6th largest food company - marketing to over 100 countries... Read on and see all cereals from General Mills

Additional Images
These are the most recent images. Click here to see all pictures for Cheerioats. 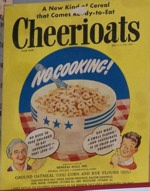 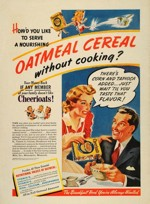 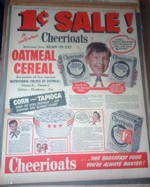 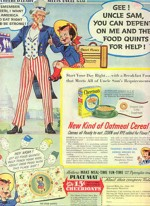 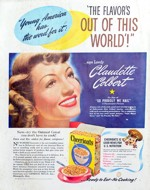 
Upload an image for this cereal
Comments About This Cereal
What do you think of Cheerioats?

I am old enough to remember Cheerioats before they were Cheerios! Never lost my love for this cereal.

Even though its from 1941, it still tastes fresh to me!

I am loving these old pictures. Cheeriots Joe reminds me of Bazooka Joe.