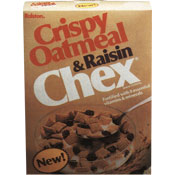 
A sell sheet introducing this cereal to grocers described Crispy Oatmeal & Raisin Chex like this:

Television commercials for the cereal began airing on November 21, 1983. These ads described Crispy Oatmeal & Raisin Chex as "the first crunchy cereal with raisins" and featured the tag line, "Chex is making noise with oatmeal!" 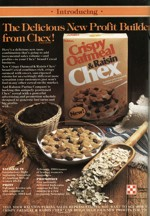 Submitter: leprican_katie
Uploaded: 7/25/2008
Additional details
Upload an image for this cereal
Comments About This Cereal
What do you think of Crispy Oatmeal & Raisin Chex?

One of the best flavors. Wish it would come back - gluten free!

Best cereal ever. I want it again.

I ate this cereal 2 times a day when I was pregnant. It was so good and then it was gone. I would definitely buy this again. It is my all-time favorite!

Please bring this cereal back. It was one of my favorites.

I wish this cereal could come back. I remember liking it a lot. I put raisins in other Chex cereals and it was never as good.

Forgot about this one. It was in our area for less than a year. Do they even make just Oatmeal Chex anymore? I'd love to see it make a comeback.

OMG did I LOVE this cereal! Of all the products they have taken off the market in my lifetime that I loved, this is the one I absolutely miss the most :(