Slimer And The Real Ghostbusters 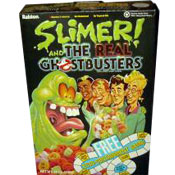 
The top ingredients in this cereal were wheat, corn, oat, and rice flour, sugar and marshmallows shaped like ghosts.

Slimer! and The Real Ghostbusters was an animated television series that ran from 1988 to 1990. 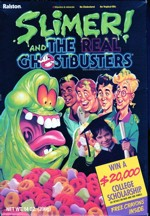 click to enlarge
1990 Slimer And The Real Ghostbusters Cereal Box

Submitter: jeffrey
Uploaded: 8/5/2010
Additional details
Upload an image for this cereal
Comments About This Cereal
What do you think of Slimer And The Real Ghostbusters?

Wow, I must have been asleep in 1990. Can't believe I missed this cereal, the Jetson's cereal, and Bill and Ted cereal. I loved all 3 franchises and was an avid cereal eater as a kid. These sounded awesome.

Such an awesome breakfast treat! There's a class five demon in every bite!!! >_<