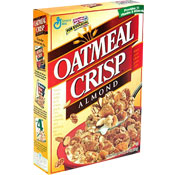 Upload an image for this cereal
Comments About This Cereal
What do you think of Oatmeal Crisp: Almond?

I cannot find this cereal or Oatmeal Raisin Crisp at any of my local grocery stores. There was one but it is either out or, since it is far away, it is rare that I can get there and must buy several boxes.

I'm sick of the commercial on the internet. Can't they come up with something that makes sense?

Commercial is great. Best one I've seen in ages. Get a sense of humor people and recognize it's a commercial and not meant to be taken so seriously. I swear people nowadays just don't have enough to worry about that they would react against this ad. It's one of my all time favorites and my children (all 4 of them) love it too and have not been mentally harmed because of it!

Lighten Up! In the commercial, he wasn't beating the heck out of them, calling them fat, or locking them in the garage with the car on. It was a funny way of depicting how good a product is, with the target audience being the younger demographic. I'm just going to take a stab at it and say that all of you people who call this commercial "horrible" defend hoarders, and call it a "mental issue". They're LAZY. That's a real issue. This is just plain comical.

Wow, grownups need to lighten up. It's just a cute commercial. Kids know it's not serious. It's not the greatest commercial, but it's really not that offensive. - Lacy

I liked this cereal but will not buy it as long as its message says that it's OK to reject kid for a BOWL OF CEREAL! Does General Mills read what we write. Does it in any way count. If it does, they will remove this unacceptable ad.

So many children go to school hungry or skip breakfast AND the unfunny commercial for this cereal that has been airing for a long time does NOTHING to demonstrate that children NEED a breakfast.

I am pleased to see that there other people who find this a negative commercial which sets a poor example for children that basically it's okay to be selfish and greedy. It is not clever advertising - rather the opposite. I have a good sense of humour and am open-minded but surely a company of the magnitude of General Mills can do better than this.

The commercial with the kids and their dad in a car is the most disgusting commercial I have ever watched. It shows people how not to treat their children and should be removed from TV.

Saw this commercial again this morning Jan 2012. Seem abusing and lying to children is fine or is this considered just bad judgement in teasing. Really good lesson for kids to learn, if you run the risk of your kids eating your cereal, don't let them have it. Come on guys, ditch this pathetic ad.