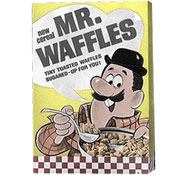 From: Ralston
Introduced in 1966


Mr. Waffles cereal came in both a regular and a banana variety. According to ads, "They're BOTH unusual!".

The box described this cereal as "Tiny Toasted Waffles Sugared-Up For You!" 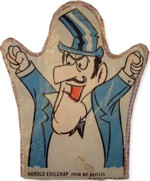 Submitter: buzzer
Uploaded: 9/21/2008
Additional details
Upload an image for this cereal
Comments About This Cereal
What do you think of Mr. Waffles?

I remember the commercial saying, "It's unsink-sinkable because it's unsog-sogable."

My sister and I begged our mother to buy a box of Banana Mr. Waffles cereal. Of course, she refused, her reasoning being that they probably wouldn't taste very good. Finally she relented and bought a box with the warning that we would have to eat them all, even if they tasted bad. Of course, they tasted like cardboard that someone had whispered "banana" over. To her credit, upon seeing the looks of distaste on our faces, she tried a bite and, for the first and only time, let us throw them away. We went back to our mainstay, Cheerios and were pretty much content with them.

I LOVED Mr. Waffles -- both the cereal & the characters. I still have the Mr. Waffles game that my mom cut off of the back of the cereal box & mounted on a piece of wood -- complete with a spinner) in which you try to outwit Evilchaps. "You're never sunk with Mr. Waffles!"