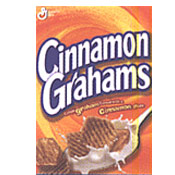 
A 1997 television commercial introduced this cereal by showing a stick of cinnamon and graham cracker falling in love to the tune of "Love Is In The Air." The following is the narration of that ad:

"You love cinnamon. You love graham. But they've never come together like this. New Cinnamon Grahams cereal. The crispy graham kissed with a sweet cinnamon glaze. A delicious part of this complete breakfast (a bowl of the cereal, milk, juice, buttered toast and bagels appeared on the screen). One taste and you and new Cinnamon Grahams will be together forever."

This cereal was launched using a cross-promotion with Old Navy called "Breakfast and Blue Jeans - Better Together". It was considered to be the first ever such promotion between a breakfast cereal and an apparel company. Old Navy coupons were included on the back of the cereal box, while Old Navy stores actually sold the cereal side-by-side with its pants, shirts, underwear, etc.

The side of the cereal box announced a sweepstakes with a grand prize of a truckload of Old Navy apparel for the student body (or at least 2,000 students) of the winner's school.

Cinnamon Grahams were really, really good. Better than Golden Grahams and also the best cinnamon cereal I ever had. Bring it back!

I'm gonna make my own in the morning. I'm just gonna pour some cinnamon sugar on my Golden Grams! Screw the cereal mega monsters telling me what I'm gonna eat!!

Need to bring it back. Best cereal ever!!

Bring back Cinnamon Grahams! My favorite cereal of all time! It wasn't around long enough to begin with, and now it needs to come back!

Cinnamon Graham was one of my family's favorite. We would love to see it back on the shelf.

Bring back Cinnamon Grahams. It was the perfect morning breakfast choice.

Bring this cereal back. I remember it well. Delicious!!!

Although only 8 people have voted on Cinnamon Grahams, I'm sure if it were back on shelves it would do well. I miss it myself. I thought it was the best cereal on the market. I don't really know why it was pulled. I wouldn't think poor sales, if so maybe it wasn't advertised enough or something. Maybe with the way times are these days, it might be a good time to try it again. A new choice and all. Who knows! Anyhoo, I would definitely be a loyal customer, but please don't change the recipe. Thank you for your time.