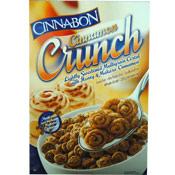 
This cereal is described on the company's website as follows:

On the cereal box, it's described as a "lightly sweetened multi-grain cereal with honey and Makara cinnamon."

To complement our signature cinnamon flavor, we use only the finest natural sweetening agents, including unrefined Turbinado sugar, honey and concentrated fruit juices.

Cinnabon Cinnamon Crunch Cereal has been reviewed on MrBreakfast.com. 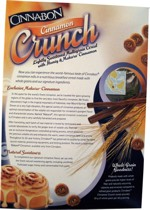 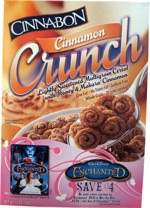 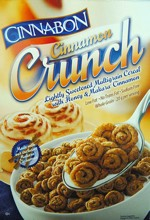 Submitter: Mr Breakfast
Uploaded: 3/19/2008
Additional details
Upload an image for this cereal
Comments About This Cereal
What do you think of Cinnabon Cinnamon Crunch?

It's now being made by Kellogg's, it's just called Cinnabon, and it's actually better now.

I cannot find it anywhere. Can someone here tell everybody where to find Cinnabon cereal?

Did they discontinue this cereal? I hope not.

I love this cereal but can't find it anymore. Can you help?

If you have a Big Lots look there for a selection. That is where I've found it.

I like this cereal, but I cannot find it in the stores.

It is really good, but cannot find it any more in the grocery store.

Why the gosh darn do they discontinue all the good cinnamon bun cereals. I bought my box from costco a while ago. Now was there last night and did not see this cereal so I thought I would see if it still on the market.

I liked it too. Unfortunately, it was discontinued a few months ago. :(