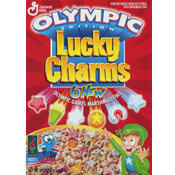 
Special edition of Lucky Charms cereal with Olympic Game Marshmallows such as green and gold torches and orange and yellow medallions. The cereal was served at training facilities and in Olympic Village dining rooms leading up to and during the 1996 Summer Olympics in Atlanta, Georgia U.S.A.

The front of the box described the product simply as a "frosted whole grain oat cereal with marshmallows" and indicated that is was an "official sponsor of the 1996 Olympic games." 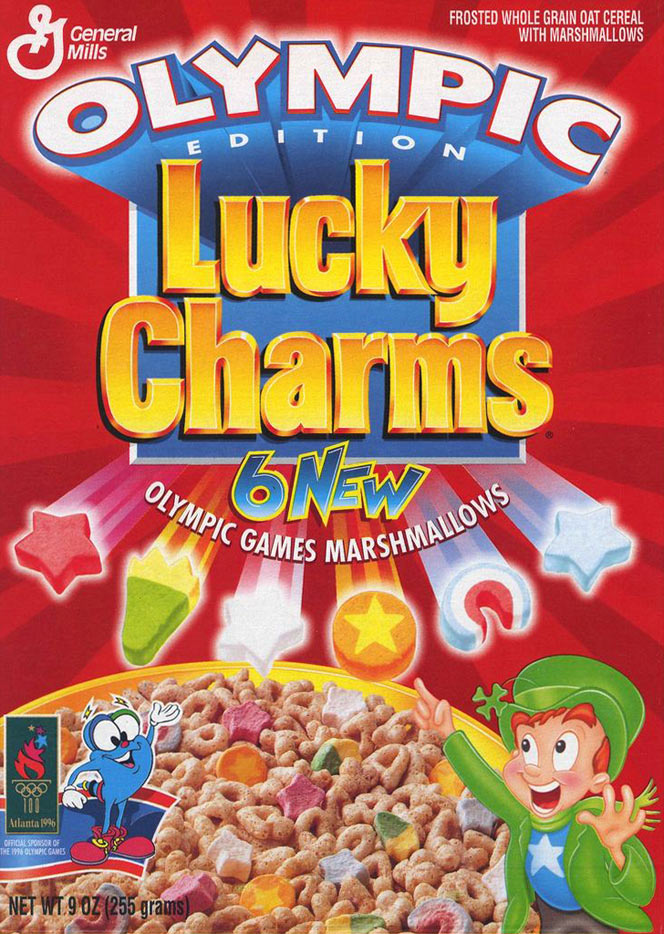 The side of the box had a much lengthier description. For some of the text to make sense, you'll need to remember that IZZY was the official Olympic mascot in 1996. He's pictured on the lower left on the front of the box. Here's the long description:

"To carry on the tradition of the original torch (which is lit from the sun's rays in Olympia, Greece), Lucky's made special two-colored torch marshmallows. The 1996 Olympic Torch will travel with IZZY more than 15,000 miles, through 42 states, and will be carried by more than 10,000 people.

"To support the 750 members of the 1996 U.S. Olympic Team, Lucky's made red, white and blue marshmallow stars and rainbows. It's an All-American Idea and a tasty one, too!

"Did you know that 1,933 medals will be given out at the 1996 Olympic Games? IZZY and Lucky wanted to make sure you felt like a winner, too. That's why you'll find lots of gold-medal shaped marshmallows in every bowl of Olympic Edition Lucky Charms. They're a tribute to all Olympic medalists and lots of fun to eat!"

The back of the box had a game called "Scoring Big With Olympic Fun!" The instructions were to "choose three of your favorite countries, and keep track of them by filling in the correct medal won in each event." It wasn't so much a game as it was a way to tally up medals for the 100-meter dash, volleyball, basketball and diving. 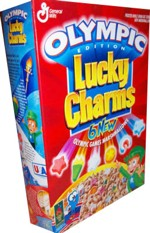 Submitter: susan
Uploaded: 10/29/2008
Additional details
Upload an image for this cereal
Comments About This Cereal
What do you think of Olympic Lucky Charms?
There are no comments yet for this cereal. Be the first! Was it good? Was it bad?
Do you have information not included in the article? Let the world know!