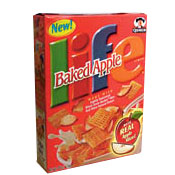 From: Quaker
Introduced in 2002


According to the box, Baked Apple Life cereal was "made with lightly sweetened whole grain Quaker Oats and other natural flavors." Written on a picture of an apple in the lower-right corner of the box, we're told, "with real apple slices!" 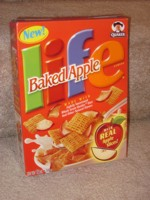 Submitter: cereal-king
Uploaded: 5/1/2011
Additional details
Upload an image for this cereal
Comments About This Cereal
What do you think of Life - Baked Apple?
By Steve-Os

Geez, these sound awesome. Were they ever released in America?

Never seen this before. I always try new cereal.