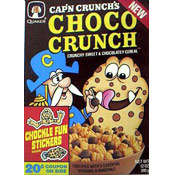 From: Quaker
Introduced in 1982


When this cereal was first introduced in the early-80's, it was described on the box as a "crunchy sweet & chocolatey cereal... fortified with 9 essential vitamins & minerals". It was made up of traditional Cap'n Crunch pieces mixed with chocolate flavored balls.

The cereal was re-introduced in 2007. It had the same name, but the recipe was very different. The new version had only one kind of piece - brown, rounded, rectangles, very similar, but not exactly like traditional Cap'n Crunch pieces infused with chocolate. The box described the new version as a "natural & artificially flavored sweetened corn & oat cereal".

Company Description: The Quaker Oats Company was founded in 1901 with the merger of three oat milling operations in the Mid-Western United States. Since then, the company has expanded operations to include a number of grocery sectors. In addition to hot and cold breakfast cereals, their products include... Read on and see all cereals from Quaker
This cereal belongs to the following Mr Breakfast Cereal Families:
Choco Crunch (Cap'n Crunch) Cereal Theater 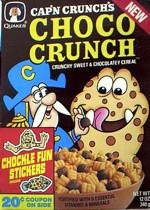 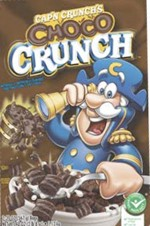 Submitter: Mr Breakfast
Uploaded: 10/3/2008
Additional details
Upload an image for this cereal
Comments About This Cereal
What do you think of Choco Crunch (Cap'n Crunch)?

Wish I could find this.

Memories of this cereal during my childhood are priceless. Would love to be able to experience again and share with my kids.

Besides Ice Cream Cones cereal, this was my all time favorite cereal. I wish that they would bring it back and not change anything about the original. Even keep the same box.

The original was awesome. That is the one they need to bring back.

Top 5 cereal of all time. Bring back the original... not some lame knock off.

I had emailed Quaker time and again to bring this back... and when they did... they messed it up with the awful 2007 version.

This was better when it was regular Cap'n Crunch pieces mixed with choco pieces. And then it became all choco pieces and it was too sweet.

They changed Cap'n Crunch to the original brand to something that taste like crap! If I want healthy I'll go by the chemical tasting crap! Gimme back My Cap'n!!! If I want the koshi, I know where it is. I know where the Cap'n lives and he's not home. There's an impostor in our midst...

By I Want It

Where can I buy this product or how can I order it online etc?

I remember this as a kid and loved it, I wish they would bring the originals back, instead of me mixing Cap'N cruch with coco puffs.