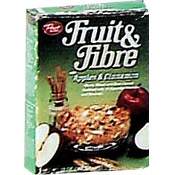 
This cereal's tag line was "It tastes so good, you forget the fiber." It was described on the box as a "whole wheat and bran cereal with apples and cinnamon." It was introduced at the same time as Fruit & Fibre With Dates, Raisins & Walnuts.

Upload an image for this cereal
Comments About This Cereal
What do you think of Fruit & Fibre: Apples & Cinnamon?
There are no comments yet for this cereal. Be the first! Was it good? Was it bad?
Do you have information not included in the article? Let the world know!