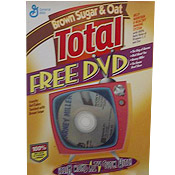 
In 1999, Brown Sugar & Oats Total was one of the first cereals to carry a claim from the Food & Drug Administration that it might help cardiovascular health because of the of the benefits of soy, oats and whole grains.

General Mills described the cereal as having "a sweet brown sugar taste and a powerful crunch".

Despite a huge $30 million TV and print marketing push in 2000, General Mills' Brown Sugar & Oat Total never quite caught on with cereal lovers. This variety of Total began to sink in the sea of cereals with similar flavors.

A 2004 promotion with Sony to place DVDs of television shows in the certain cereals gave Brown Sugar & Oat Total an extra breath of life. 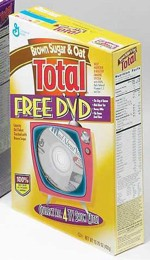 Submitter: Mr Breakfast
Uploaded: 3/20/2008
Additional details
Upload an image for this cereal
Comments About This Cereal
What do you think of Total: Brown Sugar & Oat?