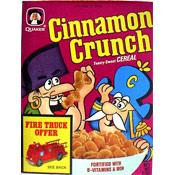 From: Quaker
Introduced in 1973


A coupon to promote this cereal's introduction described Cinnamon Crunch Cereal like this: "This new cereal is sweet and crunchy, of course; but what makes it special is the wake-up flavor of cinnamon. If your children like cinnamon toast for breakfast, they'll love Cinnamon Crunch. Why not try it yourself!"

The complete name of the cereal was Jean LaFoote's Cinnamon Crunch. LaFoote was a pirate character who comically terrorized the Cap'n Crunch character.

The following are screen caps of a TV ad for Jean LaFoote's Cinnamon Crunch that aired around 1973 and 1974: 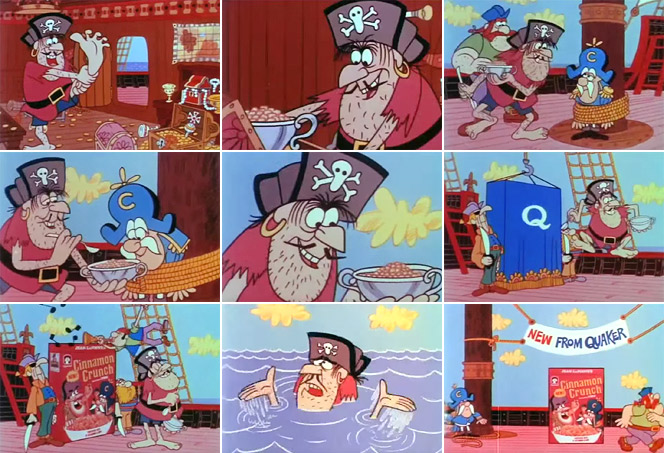 The introduction date of 1973 is based on the first time this cereal appeared in a grocery store newspaper circular.

Company Description: The Quaker Oats Company was founded in 1901 with the merger of three oat milling operations in the Mid-Western United States. Since then, the company has expanded operations to include a number of grocery sectors. In addition to hot and cold breakfast cereals, their products include... Read on and see all cereals from Quaker
This cereal belongs to the following Mr Breakfast Cereal Families:
Cinnamon Crunch (Cap'n Crunch) Cereal Theater 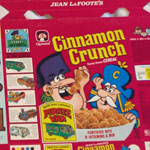 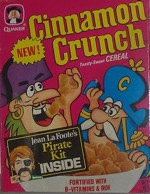 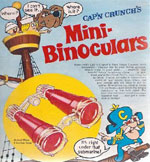 Submitter: jeffrey
Uploaded: 9/9/2010
Additional details
Upload an image for this cereal
Comments About This Cereal
What do you think of Cinnamon Crunch (Cap'n Crunch)?

View all 54 comments for this cereal.

Cinnamon Crunch was so delicious. Please bring it back.

By Pauline from LA

This was my favorite cereal ever! I'm in my mid 50's and looking it up now. Never got over loosing it. Pretty sad story, right? Now can we have it back?

My absolute favorite of the Crunch cereals!

A cereal ahead of its time. Now that cinnamon is popular, it would be the right time to re-introduce it to the public.

Please bring back Cinnamon Cap'n Crunch cereal... it was a delicious cereal... and I was so disappointed when it was discontinued... it was the best... cinnamon flavor, with lots of crunch, and not too sweet. Please bring it back.

Bring it back! I recently asked Quaker to do limited time run.

ANOTHER of my all time top favorites! Also, the best Cap'n Crunch cereal by far!

This cereal should be in the BREAKFAST HALL of FAME. In its hey day, it was the the GREATEST! BRING IT BACK!

Was not a fan of this cereal. Because of the cereal's process, it got soggy in milk immediately. Perhaps that is why it was discontinued. Jean LaFoote is not Cap'n Crunch.

View all 54 comments for this cereal.