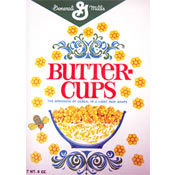 From: General Mills
Introduced in 1965


A television commercial for this cereal featured kids picking Buttercups in a meadow and eating them.

After the spot aired, General Mills received complaints that actual buttercup flowers (of the genus Ranunculus) were deadly poisonous and children probably shouldn't be encouraged to eat them.

It's believed that the cereal was pulled from the market immediately following these complaints.

The cereal pieces were shaped like flowers. The cereal was described on the box as "the goodness of cereal in a light new shape." 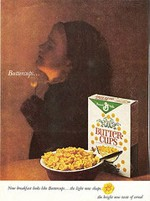 Submitter: Mr Breakfast
Uploaded: 3/18/2008
Additional details
Upload an image for this cereal
Comments About This Cereal
What do you think of Buttercups?

Loved Buttercup cereal! Almost forgot they existed. I was maybe 6 or 7. This was in the mid-60's. Would like to try them again before I buy the farm, but I doubt I'll be so lucky.

I remember the TV ads - little girl in a meadow with her dog (with a voice over says 'Now breakfast looks like Buttercups' - sad they discontinued it.

I remember eating Buttercup cereal when I was about 5 and loved them. So, that must have been in 1966.

Oh please bring these back. I thought they were the best and pretty too!

I wish I could taste it again.

As a small child, I remember eating this cereal back in the late 60's. The Buttercups cereal was my favorite - it was sold in a test market was in Milwaukee, Wisconsin. My school had us try this cereal and Honeycombs by Post. I picked the Buttercups cereal because it was not as sugary as the Post Honeycombs. I liked the texture and the taste. I wish that they would bring it back and test market it in the Boise, Idaho area. I know many people would try it and also love it.

I loved Buttercups, especially with honey and milk. I am sad that GM stopped making them. Rice Krinkles, and Puffa Puffa Rice were good cereals too. Kaboom cereal was among one of the worst tasting IMO.

I am sorry that I left out a word in my comment. I meant to say that the cereal happened to LOOK like the snack called "daisys".

I don't know what Buttercups cereal tasted like, but they happened to like the snack that General Mills also used to have called Daisys.