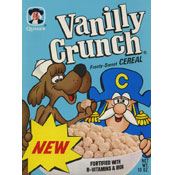 From: Quaker
Introduced in 1971


According to one of the first boxes of Vaniilly Crunch, "Vanilly Crunch is the latest cereal from Cap'n Crunch. It has a flavor kids love so it's another good way to give them variety at the breakfast table. And like all Cap'n Crunch cereals, it's fortified. One bowl gives them a mornings worth of B vitamins and iron."

The tag line for the cereal was "The cereal that tastes like a crunchy birthday cake".

On the back of one of the early boxes, a comic explained how the cereal was invented. A Cap'n Crunch character named Seadog was making a birthday cake when batter from the cake accidentally fell into a bowl of Cap'n Crunch cereal. Cap'n Crunch liked the cereal so much, he decided to make some more for his crew (consumers).

The cereal was described in a television commercial as "Crispy, creamy-colored globes of goodness".

Seadog appeared on the first box of Vanilly Crunch Cereal. A story on the back of the box showed how the clumsy character invented the cereal by getting cake batter in a box of Cap'n Crunch.

Apparently, Seadog was also a Sea-Spy. He was shown on the back of another box in spy clothing hawking a send-away offer for a spy kit.

In a television ad for Vanily Crunch, this feminine, friendly whale was responsible for transporting loads of cereal (in her large mouth) to Cap'n Crunch's ship.

Wilma appeared on boxes of Vanilly Crunch along with the character Seadog. 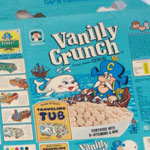 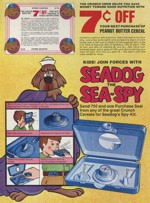 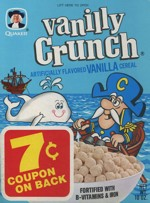 
Upload an image for this cereal
Comments About This Cereal
What do you think of Vanilly Crunch (Cap'n Crunch)?

View all 69 comments for this cereal.

My favorite cereal as a kid... was crushed when they discontinued it.

Best ever from any cereal maker.

Loved it... my favorite of the Cap'n Crunch varieties.

I'm with everyone else! Wish they'd bring it back on the market... with the SAME recipe, of course!

My favorite cereal of ALL TIME! I wish they would bring it back.

Loved it (but not nearly as much Jean LaFoote's Cinnamon Crunch from Cap'n Crunch).

Where can I find Vanilly Crunch cereal?

This was the best cereal of all time. Just seeing pics of the boxes makes my mouth water.

For the love of God, bring it back!

View all 69 comments for this cereal.