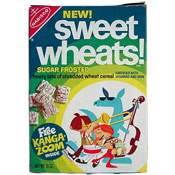 From: Nabisco
Introduced in 1971


Sugar frosted Sweet Wheats! cereal was introduced by Nabisco in or around 1971. The cereal only lasted only a short time before it disappeared from shelves. It was promoted on the cereal box as "frosty bits of shredded wheat cereal - fortified with vitamins and iron".

As descried on the back of one box, "These groovy SWEET WHEATS! are scrumptious bits of Shredded Wheat all frosty and sugary and fortified with vitamins and iron! If your mom doesn't believe it ask her to read the side of the box where it tells it like it is."

The mascots for the cereal were a quartet consisting of three children and a kangaroo. In most depictions, the gang was seen playing musical instruments.

Known premiums that accompanied the cereal include a "Free Kanga-Zoom" (a whirling, flying propeller disc with launcher), a free 12-page "Fun Book" (4 different books were available) and small plastic kazoos with characters from the box printed on them. 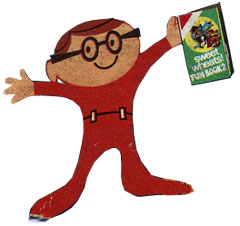 Willie The Kid was the smart one of the group. As he said on the back of one box, "I'm Willie The Kid and I eat my SWEET WHEATS! cereal straight from the box, the intelligent way."

Willie usually held a cereal box in his hands while the the other mascots commandeered musical instruments. Although on the cover of a Sweet Wheats! fun book included in some box of cereal, he is shown playing the clarinet. 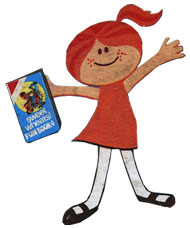 As this character described herself on the back of one box, "I'm Millie... and being a very 'couth' kid, I eat my SWEET WHEATS! cereal out of the bowl."

Millie was shown on the cereal box playing both the snare drum and the washboard. 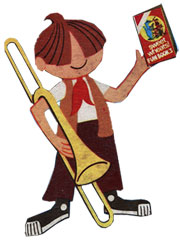 This character described himself on the back of one box. "I'm Big Boo... and since I creep up on people and yell 'boo', I juggle-eat my SWEET WHEATS! cereal."

Big Boo appeared to be the brass player for the group as he was pictured playing both the trumpet and the trombone. 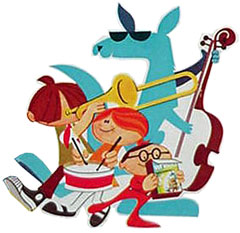 As his name implies, Blue Kangaroo was blue. He wore sunglasses and seemed to embody the essence of the beatnik hipster movement. 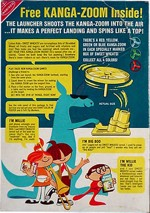 Submitter: Mr Breakfast
Uploaded: 2/10/2008
Additional details
Upload an image for this cereal
Comments About This Cereal
What do you think of Sweet Wheats!?

There WAS a commercial and the song was so cool I remember it from almost 50 years ago. Blue Kangaroo was singing in a cool low baritone voice... 'when you're getting up and startin' your day, you'll want more, sweet wheats is the cereal that ya gotta look for, Sweet Wheats Frosty Bits of Shredded Wheat, *TROMBONE* Vitamins and minerals in every bite, *smack smack smack* Hey You're RIGHT!' Not exact, but darn close.

A commercial was made regarding Sweet Wheats... I remember when it was aired. My siblings and I (especially my younger brother Eric) laughed for hours afterwards.

I seem to recall one commercial... the jingle must have made an impression on me because I remember it to this day:

I do remember this cereal, but it's too bad that no Sweet Wheats commercials were produced or aired.