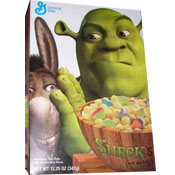 
Also known as Shrek II cereal, this was a sweetened corn puff cereal with marshmallows in the shapes of Shrek, Donkey, Princess Fiona, Puss In Boots, Gingerbread Man and a magical potion bottle.

In 2004, General Mills had Shrek fever. In anticipation of the the animated film Shrek 2, not only did they create this cereal, they also placed the Green Ogre on boxes of many existing cereals, on Pop-Secret Pop Corn, and they created Shrek Fruit Snacks and a Shrek 2 Pillsbury Sugar Cookie Kit.

The following text is taken from a May 27, 2004 General Mills press release announcing the products:

Families eagerly awaiting the return of Shrek to the big screen on May 19 can now find a collection of products to help bring the story home. Kids can dunk an ornery ogre or a wisecracking donkey in milk with Shrek cookies, scoop up Princess Fiona or a magic potion bottle in Shrek cereal, or enjoy green Shrek microwave popcorn. Shrek's mug will also grace the package fronts of breakfast treats and fruit snacks, and special Shrek watches will be available in favorite Big G cereals.

"We're so excited to bring the Shrek experience to life in a new way," said Andrea Arlich, General Mills Promotion Marketing. "Shrek and his friends are so popular with kids and adults, and these products offer a new opportunity to interact with the loveable DreamWorks characters."

In Shrek 2, the fairytale continues as everyone's favorite ogre faces his greatest challenge of all - the in-laws. Shrek and Princess Fiona return from their honeymoon to find an invitation to visit Princess Fiona's parents, the King and the Queen of the Kingdom of Far, Far Away. With Donkey along for the ride, the happy couple ventures off on a whirlwind of new adventures with a host of new fairy tale characters to lampoon along the way.

Wake Up with Shrek

An ogre can have a mighty strong hunger when he wakes up, so Big G created new Shrek cereal - much tastier than the bugs and critters in Shrek's swamp. The sweetened corn puff cereal has marshmallow pieces in the shapes of Shrek, Donkey, Princess Fiona, Puss In Boots, Gingerbread Man and a magical potion bottle.

For those whose breakfast tastes tend toward the more traditional, Shrek still is within reach. Specially marked boxes of Trix, Cocoa Puffs, Cinnamon Toast Crunch, Cheerios and Honey Nut Cheerios will include free, glow-in-the-dark in-pack watches featuring Shrek characters. Ten different watches are available, including Puss In Boots, Dragon, Pinocchio and The Three Little Pigs, and two designs each for Shrek, Princess Fiona and Donkey.

Submitter: Mr Breakfast
Uploaded: 10/15/2008
Additional details
Upload an image for this cereal
Comments About This Cereal
What do you think of Shrek's (Not Donkey's)?

This was the best cereal that I have ever had! I want some more Shrek's (Not Donkey's) now! Totally the best!