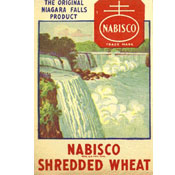 From: Nabisco
Introduced in 1930


Shredded wheat was first developed by a man named Henry Drushel Perky. Like so many early cereals, Shredded Wheat was invented to help dyspepsia (abdominal pain caused by difficult digestion).

Perky found that running boiled wheat though a shredding machine resulted in threads of wheat which had a toasty flavor and were easy to digest after baking.

Though his company, the Cereal Machine Company (renamed the Natural Food Company in 1895), Perky set out to provide Shredded Wheat on a large scale. His efforts were successful.

Dr. John Kellogg offered to buy Perky's interest in Shredded Wheat, but the offer wasn't high enough. Perky did eventually sell his Shredded Wheat business and the cereal found it's way to the National Biscuit Company, known today as Nabisco.


The following description and history of this cereal is from a court ruling in the 1938 case of Kellogg Company v. National Biscuit Company:

Shredded wheat is a product composed of whole wheat which has been boiled, partially dried, then drawn or pressed out into thin shreds and baked. The shredded wheat biscuit generally known is pillow-shaped in form. It was introduced in 1893 by Henry D. Perky, of Colorado; and he was connected until his death in 1908 with companies formed to make and market the article. Commercial success was not attained until the Natural Food Company built, in 1901, a large factory at Niagara Falls, New York. In 1908, its corporate name was changed to "The Shredded Wheat Company"; and in 1930 its business and goodwill were acquired by National Biscuit Company. 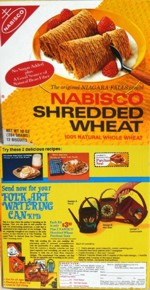 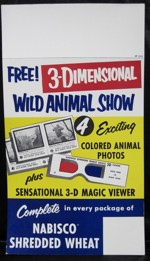 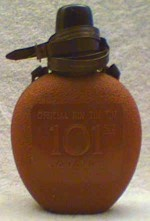 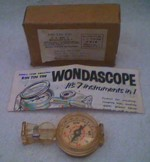 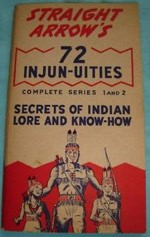 
Upload an image for this cereal
Comments About This Cereal
What do you think of Shredded Wheat (Nabisco)?

Started in about 1950... 2 biscuits for breakfast with hot water poured over them and then drained water before milk and sugar was added.

Hi - Was shredded Wheat ever produced or manufactured in Peru, South America? Thank you.

You can still buy this in Canada. An absolutely wonderful cereal!

Where did my shredded wheat go?

Very disappointed that we can no longer buy Nabisco shredded wheat. Bought and loved it for many years. Post isn't half as good. Really makes me mad when a brand is totally wiped out.

Why have they been removed from my local grocery stores? Harris-Teeter, Publix, Food Lion, etc.

Large biscuit Shredded Wheat is now available everywhere... love crushing 3 biscuits and dumping in a bowl of warm milk and a sugar.

By Where Is It

This has been my favorite cereal for years and now I can't find it in the stores. The substitutes are terrible. Some guy at Kraft has made a big sales blunder.