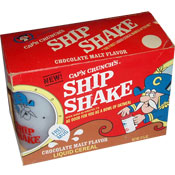 From: Quaker
Introduced in 1966


While not a cereal, we decided to include this product in our giant database of cereals because it is so often mistakenly included on cereal lists... and it's kinda fun.

Ship Shake Cap'n Crunch Liquid was a powdered breakfast drink made from oat flour... sort of like Slim-Fast shakes without the "slim".

This product originally came with a shaker cup with a picture of Cap'n Crunch on the side.

The package made the following claim: "When mixed as directed it's as good for you as a bowl of oatmeal."

The following flavors of Ship Shake were available: Chocolate, Chocolate Malt and Butterscotch.


On the back of one package, Cap'n Crunch and his cartoon friends shared how they enjoy this product in a cartoon panel titled "Shakes Alive! Look How Many Ways You Can Enjoy Ship Shake":

1) "Ship Shake is so good, I not only drink it at breakfast, I have it at bedtime too."

2) "I pack it in my seabag for after school snacks." 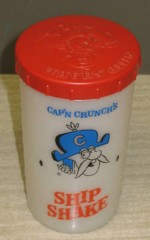 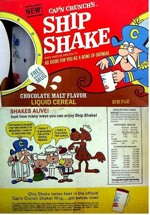 Submitter: jeffrey
Uploaded: 9/19/2010
Additional details
Upload an image for this cereal
Comments About This Cereal
What do you think of Ship Shake Cap'n Crunch Liquid?

I loved the Malt Chocolate flavor. It was so good!

I loved the chocolate malt flavor. I can still taste it. Mmm, bring it back.

Being very little at the time, I thought it was Carnation Instant Breakfast being given away with Cap'n Crunch name. I was so disappointed when I tried it and realized it wasn't the same. I remember a terrific chocolate malt flavor : I wish it was still available!

I still have my Ship Shake cup! Someone tell Cap'n Crunch to make this again!

Anyone remember this commercial/ jingle for this: "Any way you make it, / if you stir it or you shake / it's Ship Shake! / (ruff! ruff! ruff! ruff!)" - The dog did the "ruff ruff ruff" part! That jingle has been stuck in my head for 40 years now (ugh!)

Where can I get more? I loved it. It was AWESOME.

I wish I could still purchase the Chocolate Malt flavor. It was delicious!

Extremely rich Chocolate Malt flavor was my favorite. It had a unique taste that I wish was still available... oh well!

This stuff was foul! You got a little cup with a lid to shake it up.