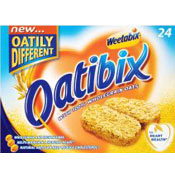 From: Weetabix
Introduced in 2006


This cereal is from the U.K. and not readily available in the U.S., although it can occasionally be found in specialty food stores and supermarkets with really good import sections.

The only ingredients in Oatibix are wholegrain oats, malted barley extract, sugar and salt. It's an oat version of the famous Weetabix cereal biscuit.

The package for this cereal has included the following text: "oatily different... with 100% whole grain oats... wholegrain and high in fibre... helps maintain a healthy heart.... (and) natural oats can help reduce cholesterol."

"Not Made From Wheat - Made From Oats Instead-Abix."

The product line was later expanded to include Oatibix Bites, Oatibix Flakes and Oatibix Bars.

Upload an image for this cereal
Comments About This Cereal
What do you think of Oatibix?

Why is this not sold in the USA?

Just tasted this on holiday in Portugal and loved it. Doe anyone know where can I get it in Ontario, Canada?

Comforting snack any time. I make a small bowl with 1 Oatibix and semi-skim hot milk. It helps me get to sleep. It's not too sweet and and I need no extra sugar... pleased as pre-diabetic.

Highly recommend Oatibix Flakes. Not as sweet tasting as other cereals. Remain crunchy longer when you add milk. Good when keeping to a low cholesterol diet as a diabetic. Will have to bring my own supply on holiday to US. Can't survive without a bowl in mornings.

Really interesting taste, and great fibre. They sure soak up a lot of milk!

It is also available in Canada.

Oatibix is no longer made and distributed in the US -- though apparently still available in the UK. I spoke to their customer service department (actually Barbaras) who confirmed this. The woman claimed that sales were poor, though the food coop in Vermont that I patronize said Oatibix sold well. Barbaras version has much, much more sugar.