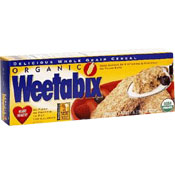 From: Weetabix
Introduced in 1932


This pressed wheat biscuit cereal originated in Australia in the 1920's. The cereal was invented either by a man named Bennison Osborne or a Melbourne baker named Edward Halsey.

Weetabix first appeared in the U.K. in 1932 with the formation of Weetabix Limited. According to Weetabix Limited, the company was "founded by two South Africans who introduced the Weetabix breakfast products to the UK."

In 1981, Weetabix Limited purchased the Van Brode Milling Company to enter the U.S. private label business and extend branded sales into the United States. In 1986, they acquired the California company Barbara's Bakery. Today, Weetabix Cereals are produced in the U.S. by Weetabix's Barbara's Bakery division. The original version of Weetabix is found in the U.S. under the name Organic Weetabix Whole Grain Biscuit. 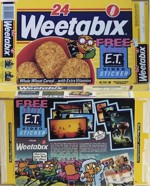 Submitter: jeffrey
Uploaded: 11/12/2010
Additional details
Upload an image for this cereal
Comments About This Cereal
What do you think of Weetabix?

I am disappointed with the diffusion of flavor (thin "layer'o'flavor" perhaps?) When I first enjoyed them over 5 years back, a lot of good grain flavor was backed with a rich malt body. A change or two, along the way. A change in formula, perhaps...?

If you look hard (on the Internet) you can find the British version of Weetabix which is organic. Frankly, to me there isn't much difference. But then I can't see much difference between this and Wheaties (which in turn isn't all that different than Total without all the extra vitamins "sprayed" on it). I like them all. I get what I can get when I can get it. (This from a man who was craving Wheaties in Vietnam and found Weetabix to be a satisfying substitute.)

The dollar store in our town sells a small box for a buck. I always have a box on hand. Delicious cereal.

I actually live very close to a Weetabix factory and sometimes I can smell the cereal when I walk out my front door. It's so good when they make Cocoa Crispies or whatever chocolate cereal they make.

Both my husband and I were very disappointed with the texture. We didn't eat it. Our dog didn't want it either. We used to enjoy it.

I'm on a special diet where carbs are limited and Weetabix meets my needs. I alternate it with Shredded Wheat or hot oatmeal. But Cheerios and Cornflakes taste better.

No more buying Weetabix now that they've compromised quality - no longer organic. GMOs no thanks!

I bought this one time hoping it might be similar to Ruskets, which I loved. I made the mistake of putting Weetabix in a bowl and adding milk, which, almost instantaneously created a disgusting paste. I guess it's something you have to grow up with but I'm just not one for mushy food. Perhaps CactusHeart's recommendation of eating it as a cookie...

Does WeetAbix contain G.M wheat ? I know that Sanitarium in Australia are proud to say they use no G.M products.

A wonderful cereal, with a delightful malt aftertaste.