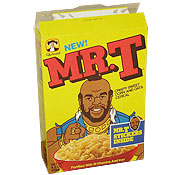 From: Quaker
Introduced in 1984


Mr. T Cereal hit grocery stores in 1984, capitalizing on the success of actor/wrestler Laurence Tureaud's Mr. T Character. Mr. T had become recognizable to most Americans through his roles in Rocky III (1982) and The A-Team (1983-1987). His kid-friendly persona was strengthened though guest appearances on Silver Spoons (1982), Diff'rent Stokes (1983) and Alvin and the Chipmunks (1983).

Mr. T Cereal was a "Crispy Sweet Corn And Oats Cereal" that tasted somewhat similar to Cap'N Crunch. The cereal pieces were shaped like the letter "T". Commercials for the cereal used the catch-phrases, "Teaming up with Mr T. (Cereal)... It's cool" and "I pity the fool who don't eat my cereal". 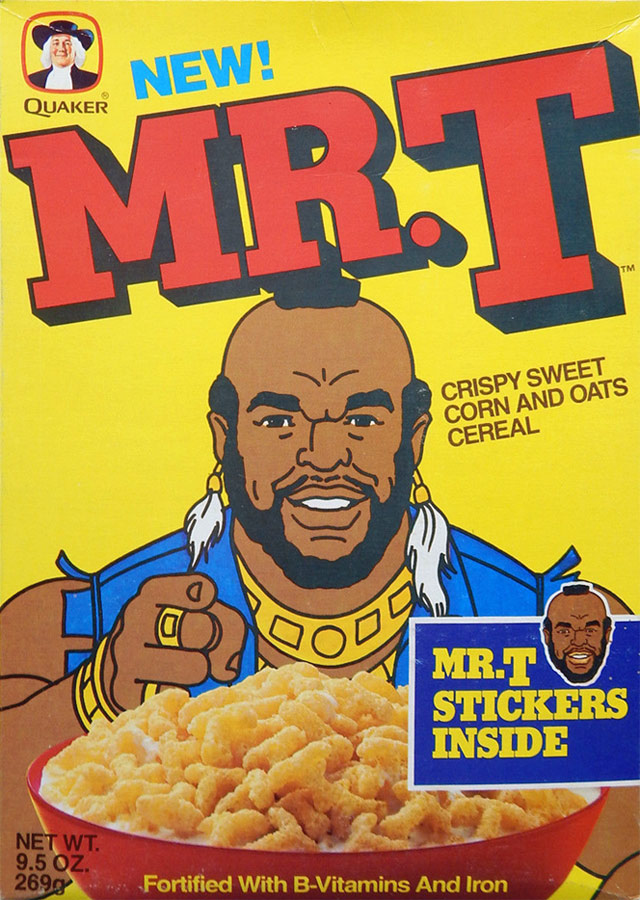 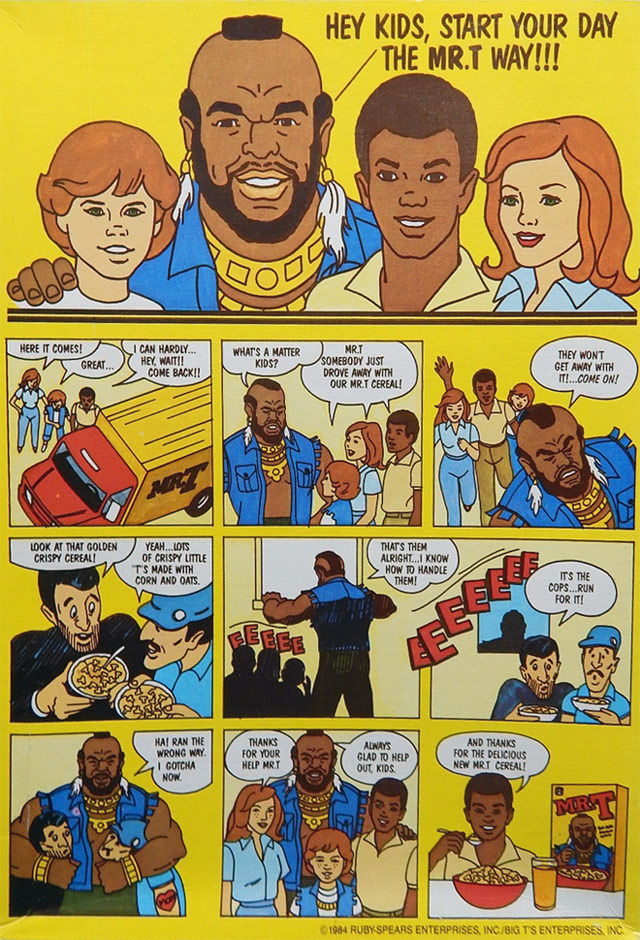 The cereal made a a memorable appearance in the 1985 film, Pee Wee's Big Adventure in a scene where the character Pee Wee Herman poured cereal over pancakes and eggs while impersonating Mr. T's signature "pity the fool" line. 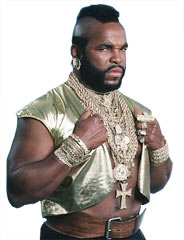 Mr. T was born in 1952, making him about 32 years old when his cartoon persona first appeared on the Mr. T. Cereal box. The animated character also appeared in its own TV series on NBC in 1983. The cartoon series "Mr. T" lasted only 30 episodes. 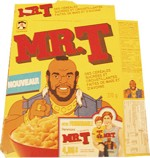 Submitter: Mr Breakfast
Uploaded: 2/10/2008
Additional details
Upload an image for this cereal
Comments About This Cereal
What do you think of Mr. T?

My dad bought this cereal for me (we watched the A-Team together). I don't really remember what it tasted like. I got the stickers and both were the same style - I still have them!

Does anyone remember getting Mr. T shoelaces if you sent in enough box tops? I had some.

Hi guys. I'm after a Mr. T Cereal box for quiet some time now. Any leads where I can find one will be much appreciated. My email address is aidenljv(at)bigpiond(dot)com.

I never got to try it. Sad face.

This is definitely in my top 5 all-time favorite cereals. Man, I loved this one.

This was my all-time favorite. To me, it was better than Crunch Berries. I have not been able to find any other cereal with that same taste as the Mr. T cereal. I was not even a huge fan of Mr. T when I was a kid but the cereal was awesome! The Donkey Kong cereal was similar but still not quite as good. But it was discontinued in the 1980s also.

Please bring this cereal back. It makes me think of life with Saturday cartoons and family.