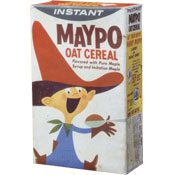 From: Independent / Undefined
Introduced in 1951


At the height of its popularity, Maypo Oat Cereal was produced by Heublein Inc., a company which also sold A-1 Steak Sauce, Grey-Poupon Mustard and distilled liquors. In the mid-1950's, Heublein acquired a small Vermont company called Maltex and, along with it, a maple-syrup-flavored hot cereal they called Maypo (originally Maypl Oats).

The cereal's famous mascot, Marky Maypo, was created in 1956 by an artist named John Hubley who based the character on his four-year-old son Mark. The first television commercial featuring Marky Maypo was wildly successful and the character's catchphrase, "I want my Maypo" became an instant part America's pop culture lexicon.

The Maypo product line has changed hands several times over the year. It is currently produced by Homestat Farm, Ltd. 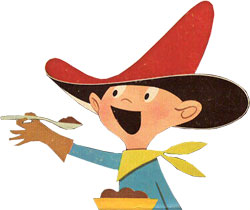 Always dressed as a little cowboy, Marky Maypo was a finicky kid who hated oatmeal until his cartoon father persuaded him to try Maypo.

Maypo Sports Heroes Ad
Upload an image for this cereal
Comments About This Cereal
What do you think of Maypo?

I really want my MAPO NOW! Why do the great things always go away? I was born in 1955 (good year for cars, music, etc.) and one thing from growing up that I miss (other than my parents that were kind enough to buy me MAPO) is MY MAPO! PLEASE consider bringing the original recipe cereal back! THANK YOU!

Nothing tastes better than a bowl of hot Maypo on a wintry morning in Chicago to bring memories back of all eight of us kids chowing down at breakfast before leaving to walk to school. A nice warm and tasty treat indeed.

I want my ORIGINAL Maypo back!

Please bring back real Maypo. I am 70 years old and I miss this cereal and I want it. Please. Thank you.

I brought my children up on the original maple in dark green box. Is there any way that this maple can be sold again in the stores? Now all you can find is the oatmeal instead of oat cereal. I want my maple!

I thought of MAYPO hot cereal this week. I remember it well as a child some 55 years ago, but found that it is no longer available in Food chain stores. I bought Cream of Wheat which I also enjoyed in the era. I also wish that they would bring the original MAYPO. Great childhood memories.

Bring it back to the stores!!!

Love me some Maypo and I've never been a big breakfast person all my life. Wish they'd bring it back to the stores though.