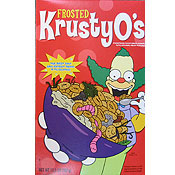 From: Independent / Undefined
Introduced in 2007


The complete name of this promotional, limited-edition cereal was Frosted KrustyO's. According to the box, it was a "sweetened multi-grain cereal with natural fruit flavors" and it was "the best you can expect from a TV clown."

"Available only while supplies last, KrustyO's breakfast cereal in the convenient 13.5 ounce box is endorsed by Springfield's most famous entertainer, Krusty The Clown. Is there a jagged piece of metal in every box? No, but there's no nutritional value in every box either. Can you really eat it? Sure you can - Bart has been eating KrustyO's for more than 18 years and, well, maybe that's why he stays so young. It's not just a breakfast cereal - it's collectable too!" 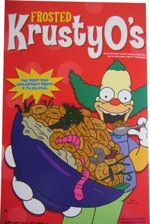 Submitter: TinaNY
Uploaded: 3/14/2008
Additional details
Upload an image for this cereal
Comments About This Cereal
What do you think of Krusty-O's?

I saved a box I bought at 7-11. It's unopened. I checked eBay recently and they're only going for $15 or $20. I'm hoping if I hang onto it long enough, it'll be worth something.

The cereal was okay, nothing to write home about. It reminded me of Froot Loops. The box shows Krusty holding a bowl of cereal with a worm, a screw, nails, and other strange objects sticking out of it, with a disclaimer below: "Product shown is not representative of the actual product inside."

This cereal was Horrible. Fun box but the cereal inside tasted like paper sprayed with fruit perfume. I guess that's what you might expect from a cereal that was only available from 7-11 and eBay.