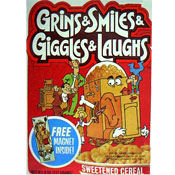 From: Ralston
Introduced in 1976


"The crunchy cereal that smiles back at you."

According to a description from the March 22, 1976 issue of Time Magazine, "Later this year Ralston will introduce... Grins & Smiles & Giggles & Laughs, which (or so kids will be told) stream from the mouth of a 'computer-type monster' named Cecil when his 'funny bone' is tickled." 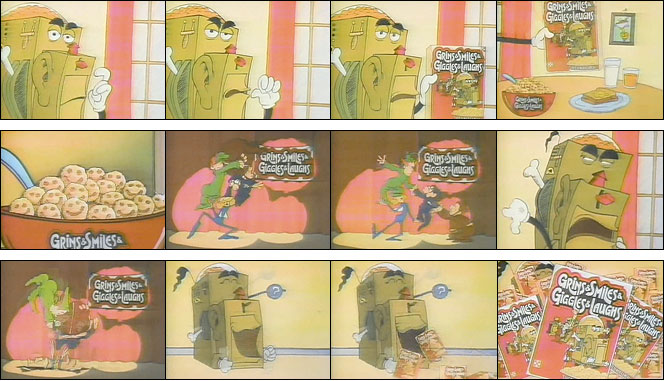 The balancing act falls down and crashes through the floor. Cecil laughs and laughs and begins to spit boxes of cereal out his mouth.

Cecil:
"Give that disappearing act some Grins & Smiles & Giggles & Laughs - the crunchy cereal that smiles back at you." 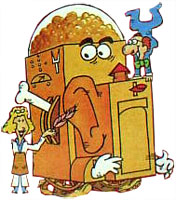 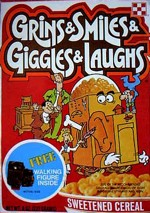 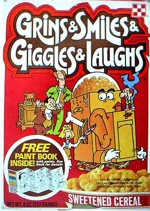 Submitter: jeffrey
Uploaded: 8/6/2010
Additional details
Upload an image for this cereal
Comments About This Cereal
What do you think of Grins & Smiles & Giggles & Laughs?

View all 53 comments for this cereal.

I loved this cereal too... mostly for the imagery and great magnets... which I think I still have somewhere! I loved Freakies too, with their commercials with the big dark tree.

Bring this cereal back!

I so remember this cereal and have been trying to remember the name. Those were the days...

I remember eating this cereal back in 1976 when I was four years old. It was really good (tasted a lot like Captain Crunch). I was sad when it was discontinued.

I ate this cereal many times back in the 1970s. It was really, really great.

A great cereal! I was crushed when they took the cereal off the market! I was 7 years old when this happened... I am now 47 years old, and if Ralston were to re-launch GSGL, I would buy it for myself and my kids to eat for breakfast! They just don't make them like they used to.

I remember loving this cereal so much as a kid in the 70s that I wrote the company praising this cereal. They then sent my a coupon for a free box. As soon as I got the coupon in the mail I rushed to the store to get my free box not realizing I needed 3 cents for taxes which I didn't have. I went straight back home to get 3 cents and rushed back to the store. It's amazing what's important to you as a child.

The seventies cereal with smiling faces. If they still produced this, I would gladly buy a box and do an adult review. But as a kid in the seventies, anything with sugar would have been rated a 5. So... with a kids memory. I do indeed rate this as a firm 5 out of 5 golden eggs.

We could never get the Cecil magnet. Why no Cecil? Quite traumatizing for a 6 year old. Luckily, I was soon too distracted with Star Wars to care.

I still have a bunch of the walkers, a couple of the magnets and I have the Cecil lamp, which was a rare mail-away premium. This and Freakies were my childhood favorites!

View all 53 comments for this cereal.