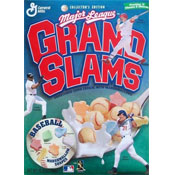 From: General Mills
Introduced in 1998


The complete name of this cereal was Major League Grand Slams. It was described as a "sweetened corn cereal with marshmallows". The marshmallows shapes were bat, glove, home plate, pennant, diamond and star. The main cereal pieces were round with red etching to resemble the stitching of a baseball.

The baseball players featured on the front of the box were Mark McGwire, Frank Thomas and Mike Piazza.

The back of the box had a send-away offer for a Batting Helmet Cereal Bowl. That promo showed illustrated versions of the following baseball stars: Jeff Bagwell, Barry Bonds, Tino Martinez, Andres Galarraga and Larry Walker. 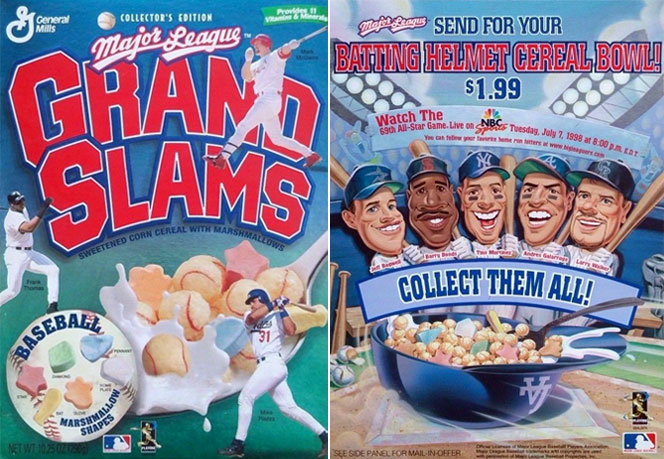 The first 3 ingredients listed were corn meal, sugar and marshmallows.


Click here to see all cereals from General Mills.
This cereal belongs to the following Mr Breakfast Cereal Families:
Upload an image for this cereal
Comments About This Cereal
What do you think of Grand Slams?

I had these as a kid, but can't find them anywhere anymore. They were AMAZING. Please bring them back... even if only annually for the World Series or something!

I have two unopened boxes of Grand Slam purchased around 96? Wondering if they had any value to them?