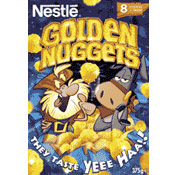 
From Nestle, this is a U.K. cereal. It appears on the U.S. list for two reasons: 1) it often mistakenly appears on lists of U.S. cereals; and 2) the cereal's mascot Klondike Pete appeared on the U.S. cereal Crunchy Nuggets.

Golden Nuggets Bandits Ad
Upload an image for this cereal
Comments About This Cereal
What do you think of Golden Nuggets?

They taste nothing like the original and are a quarter of the size. What a let down.

In the 1970's, they were actually Nuggets. Now for some reason, they are just gravel and DEFINITELY NOT the same recipe. Like everything these corps get their mitts on, it's destroyed forever.

Just had them for the first time in ages and what a let down. None of the taste they used to have and I don't know about nuggets - more like gravel.

Love em. They are the bomb. Should be the best cereal of all time. Klondike Pete for president!

I love these. They are so delicious! Five out of five from me. Oh yeah! I'm 11 years old.

The first time I tasted it, is was awesome but if you have it loads of times... it tastes boring so don't have them loads of time because they don't taste as good. :(

Everyone in John Smeaton Community College likes them.