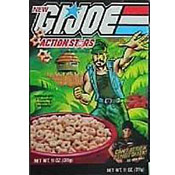 
G.I. Joe Action Stars was based on a popular line of military-themed action figures which date back to 1964. The cereal debuted the same year as the animated television series "G.I. Joe: A Real American Hero".

There were multiple variations of cereal box - each featuring a different character from the G.I. Joe collection drawn in an action pose. Among the characters pictured were Duke, Gung-Ho and Shipwreck.

The cereal itself was a collection of oat /grain pieces shaped like hollowed-out stars. The cereal was said to have tasted like Lucky Charms without the marshmallows.

A television commercial for the cereal (seen here) depicted a boy making his way to a bowl of cereal led by the character Duke. After eating the cereal, the boy flies into the air following another G.I. Joe character named Starduster. Of interesting note to G.I. Joe fans and collectors, this was the only time that the action-figure Starduster appeared in animated form. He was never part of the cartoon television series. 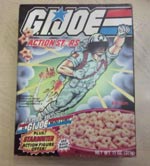 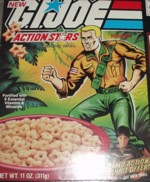 Submitter: Mr Breakfast
Uploaded: 4/25/2008
Additional details
Upload an image for this cereal
Comments About This Cereal
What do you think of G.I. Joe Action Stars?

If anyone has a Star Duster, Quick Kick, or Flint version box, please contact me as I would be an interested buyer! Xavieur(at)aol(dot)com

Me too, @CactusHeart. It is too bad Starduster was in the cartoon.

I remember this cereal. I got a box when I was a kid. At one point, it had an offer for a mail-in starduster figure, worth about 150 bucks now!

Yeah! I like it. It was tasty back in the day and it still would be today.

Yes, it's true... it DID taste like lucky charms but without the marshmallows. You ever TRIED eating lucky charms without the marshmallows? That's like wearing a ring with the stone taken out of it. Shyeahh... Loved the HECK out of Gi Joe back then though, and although I could never have any of their toys to play with (cause I'm a girrrlll and girls aren't supposed to play with boys' toys), I could manage to get an occasional 'yes' out of my parents to get me this cereal...