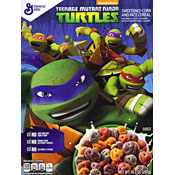 
This limited edition cereal, produced in partnership with Nickelodeon, is described on the box as a "sweetened corn and rice cereal (that is) naturally fruit flavored with other natural flavors." The cereal pieces are intended to look like the faces of the Ninja Turtle characters Donatello, Michelangelo, Leonardo and Raphael. But most would agree the pieces look more like multicolored, generic ghost faces.

The back of the introductory box had an activity panel titled "Become A Super Mutant Hero" with a cut-out Super Mutant ID Badge and a way to determine your personal mutant hero name and animal likeness. It turns out that I (Mr Breakfast) am a cheetah with the name Professor Neutron Mountain. 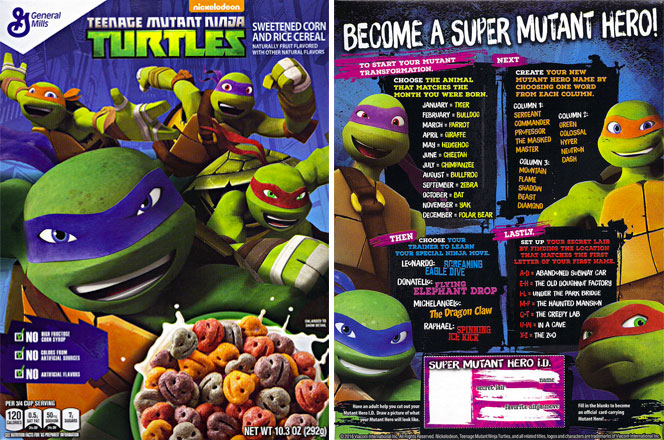 It's important to note that another cereal called Teenage Mutant Ninja Turtles (1989) was introduced by Ralston back in 1989. That cereal came out a few months before the release of the first live action "Teenage Mutant Ninja Turtles" film. The cereal itself was very different from the 2016 iteration. It was sweetened Chex-esque pieces mixed with marshmallow bits. Below are some pictures of the 1989 cereal:

Click here to see all cereals from General Mills.
This cereal belongs to the following Mr Breakfast Cereal Families:
Upload an image for this cereal
Comments About This Cereal
What do you think of Teenage Mutant Ninja Turtles (2016)?

Disagree with the bad reviews. I think this was a decent, if unexceptional, cereal.

This is exactly the same as Kaboom cereal. All they did was replace the clown with turtles.

Teenage Mutant Ninja Turtles... I really don't like it at all. It tastes like a cross between Lucky Charms and something else. My mom paid good money for it. This cereal is no good for kids.

Ugh, why couldn't they just bring back the original Turtles cereal from the 90's? These were horrible tasting. They tasted like a bland version of Fruit Loops and the pieces were extra crunchy and didn't soften in the milk even after leaving them in for 30 minutes. I'd pass on these. Very weak tasting and not very sweet either for a kid's cereal.