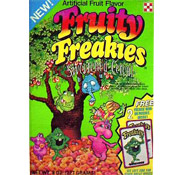 From: Ralston
Introduced in 1975


The origin of this cereal was described in a fictional (I presume) story on the back of the box. Prepare to read about a tree that grows breakfast cereal and how that cereal inspired a group of Freakie characters to sew the patches which were to become the first premium offered in Fruity Freakies Cereal:

"The Day The Freakies Lost Their Marbles, Or, What Have These Patches Got To Do With New Fruity Freakies Cereal?

"A long time ago (two weeks to be exact), Grumble came out with a startling statement. 'Fruit!', he said. 'Fruit?'. the other Freakies asked. 'Fruit!', he answered. Perplexed, BossMoss asked him to explain. 'I like fruit,' Grumble said, 'Once in a while it would be a nice thing to have around.'

"Since this seemed to be a good idea to everyone involved, BossMoss developed a seed that grew into a lovely tree bearing delicious fruit-flavored Freakies cereal. But when the Freakies tasted their new cereal, something very strange happened. First, they all jumped up in the air and sang 'Sweet Sue'. And then they all sat down and began to weave and sew. And the result of all this craziness was 20 different iron-on patches with pictures of the Freakies, and the tree, with the very favorite sayings of each Freakie.

"Now, no one knows why tasting their crunchy fruit-flavor cereal made them behave this way. And it really doesn't matter. The only thing that matters is there are two patches packed free inside this box just for you."

Submitter: jeffrey
Uploaded: 11/17/2010
Additional details
Upload an image for this cereal
Comments About This Cereal
What do you think of Fruity Freakies?

They were a complete sugar overload - and I loved every bite. And there was even a special version of the original Goody Goody figure wearing a Carmen Miranda like fruit hat contained in specially marked packages.

I still have the Freak Freak magnets from the boxes.

This was the best cereal ever. That and Quisp. I want someone to start making this again!

I miss Freakies. The cereal was good and the boxes were great.

I just showed my four year old a toy I still have from Fruity Freakies. The cereal was available in 1975-1976.

I loved Fruity Freakies! Can you still buy them?

I gotta see the commercial!!! Where can I find it? Please add it to your page.