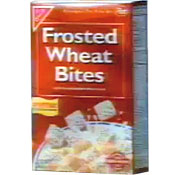 From: Nabisco
Introduced in 1996


"The Frosted Cereal Even Moms Love."

This cereal was described on the box as a "lightly frosted shredded wheat cereal" that was "98% fat free."

An unusual thing about this cereal is that the box shows both the Nabisco logo and the Post logo. This reflects the sale of the Nabisco Shredded Wheat cereal line to Kraft Foods in 1994 and the subsequent integration of those products into the Post family of cereals.

I remember that slogan about a frosted cereal mom will love, but I don't remember the cereal at all. Did they use that slogan for another cereal too? Or I might be thinking of "a face only a mother could love". Hmmm...