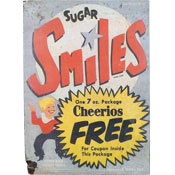 From: General Mills
Introduced in 1953

It was described on the front of the box as a "corn and wheat sugar sweet cereal."

Sugar Smiles was a combination of sugar-coated Kix cereal and plain wheat pieces. Within a year, the wheat pieces were removed from the cereal and the name was changed to Sugar Jets.

Submitter: jeffrey
Uploaded: 11/4/2010
Additional details
Upload an image for this cereal
Comments About This Cereal
What do you think of Sugar Smiles?
By T.C.D.

Those smile masks on the back of the box are hilarious. First time hearing about this cereal. Seems fun.