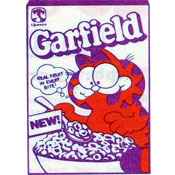 From: Quaker
Introduced in 1985


This short-lived cereal came in both raspberry and blueberry flavors. Boxes of Garfield cereal are extremely difficult, if not entirely impossible to find. Some extreme cereal collectors have managed to find coupons for the cereal. It's possible that Garfield Cereal never made it out of the test market phase.

Interestingly, Garfield promoted Honey Nut Cheereos in commercials for Quaker's competitor General Mills in 1993. In 1986, Garfield Bike Reflectors were a premium inside of boxes of Kellogg's Frosted Flakes and Raisin Bran cereals. 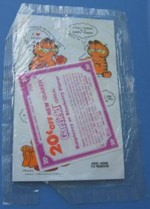 Submitter: jeffrey
Uploaded: 9/10/2010
Additional details
Upload an image for this cereal
Comments About This Cereal
What do you think of Garfield?

Garfield rocks. They should give him another cereal.