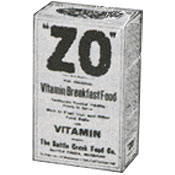 
This cereal was described in a magazine ad as "ready to serve breakfast food that is rich in vitamins. It makes children grow - eat crispy 'ZO.'" Another ad called it a "toothsome vitamin cereal everyone enjoys." We know that this cereal was being produced in 1928, 1929 and 1930.

An advertisement of in a 1928 issue of Good Health Magazine titled "'ZO' Goes to the South Pole" described the cereal's connection to Antarctic explorer Commander Richard E. Byrd:

"With Commander Byrd and his brave comrades on board the good ship City of New York - bound for the perilous wastes of the South Pole region - are several thousand packages of 'ZO'. Made from whole wheat and barely, reinforced with Savita - the vitamin yeast extract - 'ZO' contains not only vitamin B and iron of the natural grain, but the extra abundance supplied by Savita. Certainly this is a food fit for explorers and pioneers - for wee boys and girls, too - and for men and women everywhere who like to keep 'fit for the fray' of every-day endeavor!"

The cereal was often advertised in tandem with another Battle Creek Food Company product called Bran & Fig. A 1930 magazine article suggested the following:

"For the perfect breakfast food, serve half BRAN & FIG and half ZO with cream and sugar. Crunchy, wholesome ZO corrects the deficiencies of modern diet. It supplies food lime, iron and Vitamin B, so necessary to modern health. Fig Bran supplies bulk to the bowels..."

Our introductory year for this cereal is based on an educated guess. 1928 is the first year we found any press accounts of ZO cereal. It is possible the cereal existed before 1928. If you have any information that might help us verify that date, please post a note below. 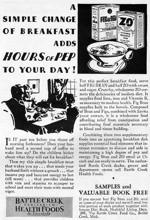 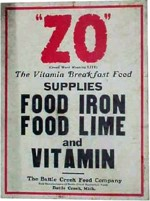 Submitter: Mr Breakfast
Uploaded: 5/10/2010
Additional details
Upload an image for this cereal
Comments About This Cereal
What do you think of ZO?

Zo was first marketed under the name Pep, but J.H. Kellogg lost that name in a trademark battle with his brother, Will Kellogg (who had bought up the name on purpose). Info found on AmericanHeritage.com in an article titled Cornflake Crusade.

I'm close to being 86 years old and back in the mid 30s it was my favorite cereal. Through the years I've mentioned ZO cereal to scores of people and have never found even one person who had ever heard of it.

I am 84 years old. Growing up, Zo was my favorite breakfast cereal. It gradually disappeared from stores. I do not remember ever seeing it advertised. When I returned from the Navy after the Korean war, I was thrilled to find Zo at a local grocery. I was disappointed to find it had turned into a nondescript tasting flake cereal.

I lived near the Battle Creek Food Company and we had access to the product during the depression years and beyond. Contrary to other comments, we liked the crunchiness and the nut-like flavor of the original product. We were still buying the product after the 1930's. In the later years, the formula for the product changed to a type of rice flake. The original product was baked in a sheet form and then crushed (but not a uniform size) to a better serving (like granola) consistency. We purchased the "ZO" until it was no longer produced. My age in 1930 was 4 years old.