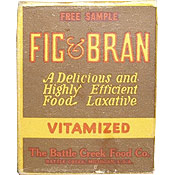 
This cereal was a product of the Battle Creek Food Co. of Battle Creek, Michigan. It was described on the front of the box as "a delicious and highly efficient food laxative" that was "vitamized." It contained sterilized wheat bran, California figs and yeast concentrate.

The side of the box made the claims, "the children love it" and "the best food laxative."

The bottom of the box offered advice to constipated consumers:

"FIG and BRAN in liberal amounts will rarely fail to secure normal bowel movements. If further help is needed send for free booklet, "How to Fight Constipation."

We believe that cereal was later renamed Bran & Fig Cereal, but we are unable to confirm the introductory dates for either cereal at this time. 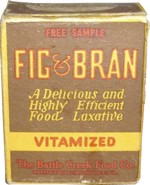 Submitter: Mr Breakfast
Uploaded: 5/7/2010
Additional details
Upload an image for this cereal
Comments About This Cereal
What do you think of Fig & Bran?
There are no comments yet for this cereal. Be the first! Was it good? Was it bad?
Do you have information not included in the article? Let the world know!