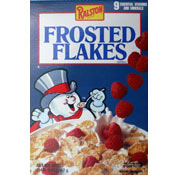 
Little is know about this cereal. From an image of a box, we've surmised that the cereal was good with raspberries (as a shower of raspberries is shown pouring into a bowl of the cereal) and the cereal's mascot was a snowman dressed a a magician. Although, it could also be argued that the mascot was a ghost dressed as an 18th century aristocrat. 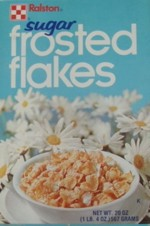 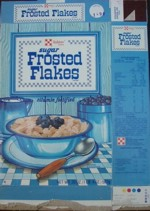 Submitter: jeffrey
Uploaded: 9/19/2010
Additional details
Upload an image for this cereal
Comments About This Cereal
What do you think of Frosted Flakes?
By ClassicCereals

I remember seeing this cereal at the local Rockbottom. But the box looked different. It had a polar bear on it. I wish I got a box. I'm pretty sure this was the box I saw: Link To Image