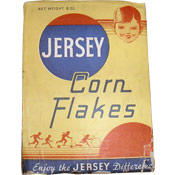 From: Jersey Cereal Company
Introduced in 1921


Jersey Corn Flake Cereal was a product of the Jersey Corn Flake Co. We know that this product existed as early as 1921. An ad in Cass City Chronicle of Cass City, Michigan promoted a "demonstration" of the flakes and offered a free package of oatmeal when two packages of flakes were purchased for 25 cents.

"These high quality Jersey Corn Flakes will actually stay crisp in milk to the last spoonful. An Inviting variety can be had by serving with bananas, peaches or preserved fruits for breakfast, noon, after school lunch or for a bedtime snack. If you like super-crispness or warm flakes, place in oven for a few minutes."


For this article, we've made certain assumptions based on pictures of old cereal boxes. We are looking for verification, so please post a comment below if you have additional information. We suspect the following:


Click here to see all cereals from Jersey Cereal Company. 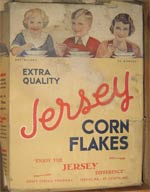 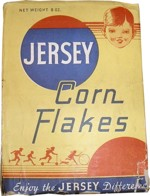 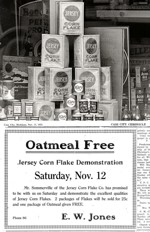 Submitter: Mr Breakfast
Uploaded: 9/14/2009
Additional details
Upload an image for this cereal
Comments About This Cereal
What do you think of Jersey Corn Flakes?

I have an old photo of a baseball player which I believe is from the Cleveland Indians. He has a little boy standing leaning on him holding a small box of the Jersey Corn Flakes. Found this in a hotel while renovating it.

I also have a share of stock dated January 22, 1919. I can't find anywhere that it is worth anything. It was issued to my great uncle. Is it worth anything at all?

Mother and Aunt worked in Irwin, Pa plant when it opened. Aunt worked there until it was closed. I have been looking for information and pictures from that time as all ours were lost.

My father was Manager of Jersey Cereal company in St. Joseph, MO. I have great photos of many of those who worked there. The Company started in Irwin, PA moved to St. Joe then sold to General Foods Corp in about 1947. I believe the Mr. Pilgrim was George Pilgrim!

The "Annual Report of the Pennsylvania Department of Agriculture" for 1915 lists both Jersey Corn Flakes and Jersey Wheat Flakes in its "Food Products Analyzed" list.

I have a Stock Certificate for 4 $100 shares of Jersey Cereal Food Co. issued to my grandfather in 1922. The envelope shows a picture of another product not listed here, Jersey Pancake Flour. The envelope also states 'Factories at Cereal, Pa and Milwaukee, Wis.' - Scott Shiley (sshiley@comcast.net)

As a young man I worked at Jersey Cereal Company in St. Joseph, MO. My main job was to deliver large cardboard boxes where ever they were needed, but since I always had extra time and had delivered all of the requests, I spent a lot of time watching the production line of filling hundreds of cereal boxes. One thing that never ceased to amaze me was switching to another brand. The boxes were changed but the cereal itself remained the same. And, these companies were competitors and marketing the exact same cereal. A Mr. Pilgrim was my boss. Sterling Bricker