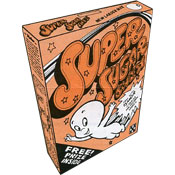 
According to the 1998 book The Nutrition Desk Reference, Super Sugar Chex contained 29% sugar. The cereal's mascot was Casper The Friendly Ghost.

Submitter: jeffrey
Uploaded: 10/14/2010
Additional details
Upload an image for this cereal
Comments About This Cereal
What do you think of Super Sugar Chex?

It was the best cereal when I was a kid. Then all of a sudden it was not on the shelf anymore.

I loved this cereal. It was my favorite! I would love to have some again.

Best cereal EVER. It was basically corn chex which was sweetened. I have never had another cereal quite like it, and I have been looking for a substitute all my life. As well, I am the only person I know who remembers it, and yes, I remember Casper the Ghost was on the box!! Bring back Super Sugar Chex!