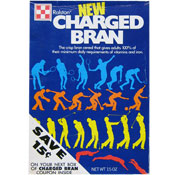 
This cereal was described on the box as "the crisp bran cereal that gives adults 100% of their minimum daily requirements of vitamin and iron."

Company Description: Ralston was originally part of The Ralston-Purina Company which was formed in 1902. The name Ralston stems from a minor social movement in the late 19th Century called Ralstonism - created by Webster Edgerly. Followers of the movement (about 800,000) followed the motto "Regime, Activity, Light, Strength, Temperation, Oxygen and Nature" - the first letters of which spelled out "Ralston"... Read on and see all cereals from Ralston
This cereal belongs to the following Mr Breakfast Cereal Families:
Upload an image for this cereal
Comments About This Cereal
What do you think of Charged Bran?
There are no comments yet for this cereal. Be the first! Was it good? Was it bad?
Do you have information not included in the article? Let the world know!