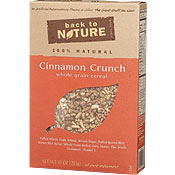 From: Back To Nature
Introduced in 2008

The company's website describes it like this, "Our delicious Cinnamon Crunch cereal is made with the goodness of whole grains, wheat, rice and oats and a sprinkling of flax seeds. It also has just the right amount of cinnamon to delight your taste buds!"

Company Description: In 2010, the company's website described it history and philosophy: "It was 1960, in Pasadena, California when we decided the best way to move forward was to go back. Back to simplicity. Back to goodness. Back to what was real. Back to honest... Read on and see all cereals from Back To Nature

Upload an image for this cereal
Comments About This Cereal
What do you think of Cinnamon Crunch?
There are no comments yet for this cereal. Be the first! Was it good? Was it bad?
Do you have information not included in the article? Let the world know!